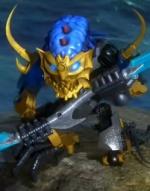 Aquagon after being transformed by the Brains

Before being possessed, Aquagon was a peaceful and shy sea creature. After it was transformed by the Brains, Aquagon was turned into a dangerous and vicious enemy.

It also possesses a pair of tentacles on its feet and spikes on its shoulders.

Aquagon wields a double sword staff that can be split into two ultra-sharp blades.