Aquagon was an aquatic Sea Creature that was mutated by a Brain. 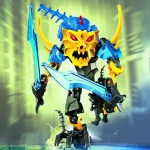 Aquagon was formerly a peaceful fish-like creature that lived in the seas. After the invasion of the Brains, it was possessed and mutated into a dangerous bipedal sea monster.

After being mutated, Aquagon and its species attacked the water system of Makuhero City in an effort to destroy the city. Hero Factory sent Nathan Evo to the water circuit to defend the city's sewers from Aquagon's attack. Evo was chased by Aquagon and his species in the service channels, but Evo managed to fend them off using his Vortex Staff.

Aquagon and his species kept chasing Evo through the channels. After the Hero was contacted by Dunkan Bulk, informing him of way to disable the Brains, Evo managed to free Aquagon and other sea creatures from the Brains. While Evo returned to the surface, Aquagon’s species returned to their habitat in the ocean.

Before being possessed, Aquagon was a peaceful and shy sea creature. After it was mutated by the Brains, Aquagon was transformed into a dangerous and vicious enemy. Its appearance also looked like that of an aquatic goblin. 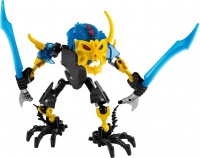