Difference between revisions of "Brains"

"There were dozens upon dozens of them, small masses of soft organic tissue creased with furrows. Individually, they looked repulsive yet somehow fragile, but in a swarm they were something else: absolutely frightening."
― Narrator, Collision Course

The Brains are a species of artifically created parasitic beings.

After being given the task to destroy Hero Factory, the Brains left their home planet, traveling through space. However, a solar storm separated one swarm from the rest.

The Brains eventually reached the Makuhero Planet was located and began infecting the creatures of the planet. The Brains used the mutated creatures to sent them toward Hero Factory. The monsters began attacking Makuhero City, and were attacked by all the Heroes that Hero Factory had available. The Brains caused widespread devastation, and the Heroes were unable to knock them off the creatures until Bulk discovered that hitting their red spikes incapacitated the Brains. Mark Surge, who had been left to guard the Hero Factory, was attacked by Brains which took control of him. While the Dragon Bolt entered the Hero Factory, Surge turned on the Assembly Tower and created blank Heroes without Hero Cores to create an army. While the other Hero teams subdued the monsters in the streets, Rocka freed the Dragon Bolt and Breez freed Surge of the Brain as the Alpha 1 Team were fighting the blank Heroes. The Brains were placed in villain containment, but many more were found by workers at the bottom of a pit that Dragon Bolt made while under the Brains' influence.

The swarm set apart by the others by the solar storm found the Valiant floating in uninhabited space. The Brain swarm leader took over the body of the ship's security commander Kirch, and the majority of crew was soon infected. Afterwards, the Brains placed the Valiant in a collision course with Hero Factory with plans to destroy it.

The Brains in space

Hero Preston Stormer started a conversation with the Valiant's captain, his friend Aquax, who claimed that the ship had engine troubles. Stormer, suspicious of his friend, boarded the ship along with fellow Heroes Natalie Breez and Daniel Rocka. Inside, they were attacked by a brain-controlled Aquax and the rest of the crew, with the Kirch-creature taking Rocka as a hostage. The Heroes were unintentionally saved by Xera, the ship's medical technician, who intervened only because the Aquax-creature was disobeying the Kirch-creature's orders. Meanwhile, several Drop Ships led by Nathan Evo approached the Valiant with plans to avoid the ship's collision with Hero Factory, but the Kirch-creature activated the Valiant's firing system to stop them.

However, after the arrival of Dunkan Bulk and William Furno, the Kirch-creature was forced to give up Rocka, and Stormer changed the Valiant's course to the sun. The Kirch-creature then made the course permanent, and the Brain attempted to abandon its host and leave the ship. However, upon exiting, the escaping Brains were vaporized by the heat. Using the explosive cargo inside the ship, Stormer changed the course of the Valiant away from the sun, ending the crisis inside the vessel.

Another group of Brains arrived and took over the planet Tranquis VII, primarily situating themselves in the capital city Tranquis. They took over the population, but a previous environmental disaster had rendered the robots partly immune to the Brains, and the robots could only obey simple commands and shambled through the city. When Jimi Stringer arrived on the planet, they chased the Hero through Tranquis. Stringer managed to get to a communications tower and call for Heroes before being possessed by the Brains.

Stringer became the only functioning Brain and planned to get off the planet, but was interrupted by Furno and Bulk's arrival in the city. Brains were sent after them, and surrounded a building the two were in; the two escaped, but fell into an ambush Stringer planned. The Brains were pushed back by Karter and security robots, which annoyed Stringer. Stringer called Stormer for more Heroes and sent Brains after Karter. They infected a security robot, and the Brains learned about the weapon Project Sunstorm. Stringer, during a fight with Furno, jumped off the communications tower, but Stormer saved him, and Furno removed the Brain. The Brains infiltrated the laboratory where Project Sunstorm was being kept, took control of the head technician Dumacc and began to activate the superweapon, but were defeated by Bulk. The Brains were rounded up by Hero reinforcements and placed in stasis.

In this universe the Brains were radically different from the main universe. Instead of being created they evolved naturally and conquered several galaxies. They were much larger, had wings, and could fire devastating laser beams as well as communicate telepathically, and were concerned with their survival. They searched for technology to manufacture robotic bodies to eliminate their weakness of being organic, but the technology was not present in their universe. Breez, Stormer, Furno, and Bulk from the main universe accidentally arrived in Von Nebula City, and the Brains went to investigate. Killing Splitface and Thornraxx on the way, they allied with Von Nebula to find the secret of the Heroes. Stormer was captured and his mind read by the Brains and they learned of Hero Factory, a way to become unstoppable. Von Nebula delayed finishing the generator needed for trans dimensional transport, and the Brains kept Core Hunter and other lower Citadel villains from entering the main building. They learned Von Nebula had betrayed them and attacked him but some were stunned by Akiyama Makuro's beta ray. The rest of the Brains were then defeated by the Alpha Teams from both dimensions.

Brains, suspended in tanks of fluid

The Brains have a single purpose: to destroy Hero Factory. They can attack by latching onto a host's head and taking control of them, absorbing their knowledge but not emotions. The Brains have leaders of groups called swarm leaders; these leaders' orders are generally followed, but not by all Brains, as evidenced by the one controlling Aquax. The exact origin of the Brains is unknown, but Aquax theorized that they do have a home planet and plan to begin an invasion of the galaxy. They are capable of surviving in space, but have been dispatched in rocket-propelled tanks.

The Brains have poisonous skin as a defense mechanism, and their tail is also prehensile, allowing them to use it offensively. Their small legs are deceptively powerful, allowing them to move swiftly and grip their target's heads firmly.

While possessing any creature, if the second spike on top of a Brain is struck, the Brain loses its power and frees the host from its control. The Brains can mutate beasts into stronger creatures. This mutation reverts once the Brain is removed.

A single Brain was included in each villain set from the 2013 Brain Attack line. The Brains are made of rubber with bright red, hard plastic inserts that attach the brains to the characters' heads and also serve as the Brains' eyes and horns. The Brains in 44001 Pyrox, 44003 Scarox, 44005 Bruizer, 44007 Ogrum, 44011 Frost Beast, and 44013 Aquagon are transparently colored yellow, green, bright orange, bright green, light blue, and blue, respectively.

44009 Dragon Bolt includes a multicolored Brain, with a mix of yellow and blue. The plastic insert, instead of red, features a glow-in-the-dark paint. As part of a special promotion with the summer sets, the LEGO shops offered an accessory pack, set 40084, which contained a solid-colored black Brain in addition to a weapon. 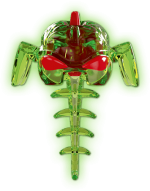 "Nothing could be more important than the task they were ordered to carry out. After all, it was vital to the future of the galaxy that Hero Factory be destroyed."
― Narrator, Collision Course

"Disembodied brains flying through space? Sounds like something out of an old monster vid."
― Captain Aquax, Collision Course

"Look what Hero Factory just went through Breez. Criminal robots escaping from prison, causing all sorts of damage before you recaptured them. Were they made bad? No. Something went wrong with their thinking and they became bad. With the brains in control, that can never happen again. There won't be any need for villains ... or Heroes. Everyone will do what is needed for the good of the swarm."
― Xera, Collision Course