Bruizer was a Rock Giant that was transformed by a Brain. 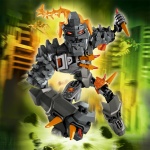 Bruizer was formerly a Rock Giant that inhabited a mountain region on the Makuhero Planet. Brains landed in his area and mutated him into a powerful beast, and Bruizer set off to Makuhero City to destroy it.

The Heroes attacked Bruizer in the city, in an attempt to repel the invasion, and his Brain was removed in the fight. Bruizer's mutation reversed after being freed from the Brains, and he returned to his homeland.

Bruizer, after being mutated by the brains, became a crazed rock monster, with a rock-smasher fist, rock shoulder armor, and razor spikes. Some of Bruizer's kind even gained an additional Rock Knife. 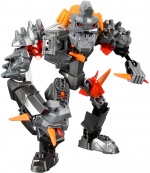 Set 44005 Bruizer was released in early-2013 with 62 pieces in the set. It includes an orange Brain that attaches to its head, and features an arm function that can swing the rock smashing fist. A Hero Core is included for 600 points in Brain Attack, and can combine with 44004 Bulk to create a non-canon combiner model.