"Tell him, Stormer. Tell him about the number of Heroes whose cores I've taken over the years. I'm someone to be respected, feared even ... never pitied."
― Core Hunter, The Doom Box

Core Hunter was a former Hero, who became a villain with a mission to disable other Heroes by removing their Hero Cores.

Core Hunter was once a Hero of the Hero Factory, and had a good friendship with Preston Stormer. However, at some point, he decided to leave the Hero Factory because of a defect in him. He felt the Hero Factory organization had nothing for him there and also felt that no one cared about him or his future. He began slowly getting more and more involved in crime, becoming associated with smuggling before finally breaking away from the Hero Factory and becoming a villain. Core Hunter became obsessed with removing a Hero's cores to disable them and show off.

Several missions to capture Core Hunter were unsuccessful, including one that where Core Hunter's getaway vehicle was destroyed, causing him to destroy the Hero's vehicle and then use a virus to take out all the vehicles on the planet in response. At some point, Core Hunter also created a duplicate of himself, using the duplicate in his heists.

Core Hunter purchased a map from Speeda Demon that showed the locations of the three Doom Box fragments spread around the universe. Core Hunter went to retrieve them to make the threat of him using the weapon enough to make him the ruler of the galaxy. At the first location, it was hidden in a secret vault guarded specifically against intruders breaking in. Core Hunter disassembled himself and waited until he was taken into the vault in a crate. Once inside, Core Hunter rebuilt himself, took the fragment and escaped, hiding it in a mine on the same planet, while situating himself in a nearby power plant. Dunkan Bulk arrived and Core Hunter fought him in the power plant. Core Hunter destroyed a dynamo in the plant, and escaped in the ensuing explosion.

After getting the third piece, Core Hunter went to hide it on a derelict ship in space. Upon arriving he was attacked by a vicious winged creature who attacked Jimi Stringer when the Hero boarded the ship to chase Core Hunter. Facing mutual death at the hands of the creature, Stringer and Core Hunter were forced to work together to navigate the creature out through the airlocks. As Stringer escorted it, Core Hunter sealed the airlocks and left Stringer out to die. He then hid the fragment of the Doom Box in the ship's cargo bay. The villain stole Stringer's ship, but there was a tracking device on it, and it was piloted right to Makuhero City where Core Hunter was caught and put in prison.

During the mass breakout orchestrated by the villains Black Phantom and Voltix, Core Hunter was able to escape the jail. However, unlike many other villains, Core Hunter briefly remained in the area, working his way through Makuhero City with the intent to disable any Heroes he comes across. Bulk was assigned to stop and apprehend him, and began a cross-galaxy chase to capture the villain.

Finally, Core Hunter went to the ship containing the third fragment, which was now junked in a ship graveyard. He hired a band of mercenaries to defend against Alpha 1 Team, who he knew was coming for him. In the cargo bay, Core Hunter assembled two of the fragments, intending to use the threat of reforming the whole thing to create a galactic ransom situation. In a standoff with Alpha 1, Core Hunter was attacked by Mark Surge who utilized his Electricity Shooter, giving Core Hunter spasms that caused him to accidentally reform the Doom Box. Arctur appeared and offered to take Core Hunter to where the Doom Box was forged, the only place it could actually be activated. Core Hunter accepted, and was teleported there, but soon Arctur and all of Alpha 1 confronted him. After Arctur was killed by Core Hunter, the Heroes goaded the villain into activating the Doom Box, while Breez used the Hero Core Remover Tool to absorb the Doom Box's energies and render it harmless, inadvertently supercharging the weapon. Core Hunter used his tool to incapacitate the Heroes, except for Surge, who he offered a position in his new empire. Surge instead fired his shooter at Core Hunter, causing the villain's powers to fold in on himself, until his body slowly winked out of existence, killing him.

Core Hunter was a member of the inner circle of Von Nebula's Citadel in this reality. He was part of the council dealing with the members of Alpha 1 Team from the prime reality, who were accidentally transported there and were looking for a way back. After Von Nebula allied with the Brains so they could find Alpha Team, Core Hunter was barred entry to the Citadel by the Brains. Alpha Team found him and convinced him to help in their efforts to get back to the prime reality. Core Hunter convinced the Brains to lower their guard, allowing Alpha 1 to knock them out and enter the Citadel.

Core Hunter was an extremely methodical and precise villain, with a surgical intelligence and a perfectionist attitude towards his villainous career. His obsession with removing Hero Cores eventually developed into his criminal specialty, and he was known to lust for more and more Cores to add to his collection. Core Hunter's belief of being a powerful villain motivated him, and he became frustrated when Stormer said he was only a small-time criminal.

Core Hunter wore a Multi Vision Mask, a custom made pair of goggles with infrared and x-ray vision capabilities.

The Core Hunter set, 6222, has been released in the second wave of the Hero Factory Breakout line, in the summer of 2012. The set contains 51 pieces, including a new Hero Core set with a printed code for use in online content. The Hero Core is not used in the actual set. The set could be combined with 6223 Bulk in order to create a larger model. 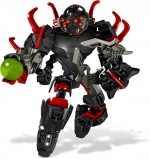 "As far as everyone at Hero Factory was concerned, Core Hunter was the worst kind of traitor."
― Dunkan Bulk, The Doom Box

"What makes someone like that go bad?"
"Maybe they want too much from being a Hero ... or not enough. Maybe they just can't follow someone else's rules — anyone else's rules. Or it could be some flaw in the design, something so small we can't find it anywhere in Assembly Tower."
― Mark Surge and Preston Stormer, The Doom Box