Rocka is a new rookie Hero and the youngest member of the Alpha 1 Team.

Rocka was built in the Assembly Tower using the most up-to-date parts and the most advanced technology. His design was based off of William Furno, in the hopes of producing another successful and powerful rookie. After his creation, Rocka began spending large amounts of time in the Training Sphere, completing over 100 missions in it. He also became friends with the Alpha 1 Team, and eventually joined their Rookie 1 division.

Five other members of the Alpha 1 Team, Preston Stormer, William Furno, Julius Nex, Dunkan Bulk, and Jimi Stringer were given new armor, weapons, and abilities in order to endure the jungle environment, and set out to recover their teammate. The team arrived on Quatros and discovered the wounded Rocka, as well as Witch Doctor and his animal slaves. Rocka was healed by Nex and outfitted with new lion armor, choosing the animal because of the gold motif matching his previous armor. During the voyage to confront the Witch Doctor, Rocka continually clashed with Furno, who perceived the rookie to be too headstrong. When the group encountered a teleportation bridge capable of letting three of them cross to where the Witch Doctor was, Stormer assigned Rocka and Furno each to lead a three man cell, one using the bridge and one traversing the jungle. Rocka led Stormer and Bulk, though the teleporting accidentally rearranged them in a smaller form. They were able to elude several Fangz before Rocka and Bulk were captured by the Witch Doctor. The two were eventually rescued by Furno's unit, and restored to size when they recharged the bridge. Furno devised a method for Rocka to be able to beat the Witch Doctor, using ancient armor pieces found in the temple to increase the rookie's size and strength. Witch Doctor eventually gained the upper hand in their fight, but his Skull Staff was taken by Stormer and broken, eliminating his source of power. Furno worked with Bulk to return Witch's stolen supply of Quaza to the planet, preventing it from exploding and saving them all. Witch arrested, the team returned to their ships to travel back to the Hero Factory; several grateful Fangz hounds also came to see them off, displaying affection towards Rocka. 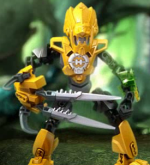 Rocka's outlook is very much like a younger Furno's; he is extremely self-assured and headstrong, willing to immediately take on a challenge without a thought to his own limitations. This confidence caused him to clash with Furno, but the two eventually settled their differences. His experience in the training sphere has given him a diverse skillset.

In his 2.0 form, Rocka carried a Multi-Tool Ice Shield. He currently wields a double-claw combo tool as his 3.0 weapon. He was temporarily armored with ancient tools on Quatros, but has since stopped using these pieces. 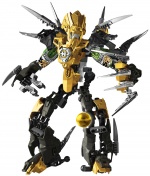