Dragon Bolt was formerly the inhabitant of a cave in the middle of a jungle. 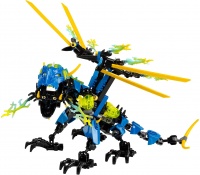