Dunkan Bulk is a powerful Hero and part of the Alpha 1 Team. 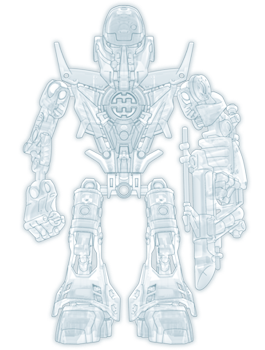 Bulk, along with Jimi Stringer and Preston Stormer, comprised the Alpha 1 Team. On one of their missions they were tasked with investigated the supposed vanishing of the planet Almaak IV, as reported by Almaak V. Stringer discovered that Almaak IV was only cloaked, and that Almaak V was responsible. Another mission had the team fight off Cornelius Zo, who was commanding an army of Tiger Ants to destroy a city. Bulk personally came up with the "strategy" that drove them off - he attacked them with a tank called the Crusher and scared them away. The team also responded to a call to apprehend a space pirate. Bulk, along with his two other teammates, guest-starred on Hero Factory FM, though were called away quickly.

Bulk was on the mission to stop Xplode and Rotor at the C-4000 attack at Merak 9, and Furno refused Bulk's help in the failed capturing of Rotor. After the battle on Lemus 2, Bulk and Stringer cleaned up the damage, before going with rookies Mark Surge and Natalie Breez to stop Corroder at Tantalus 5. Bulk saved Surge from being crushed under girders, but was pinned down himself. Surge was unable to free Bulk, so Stringer set up a Hero cell until William Furno and Breez arrived. Bulk was recharged back at the Hero Factory.

When Stormer arrived at Hero Factory infected by nanobots, Bulk tried to stop him from escaping, but was defeated. Though he offered to help Furno continue looking for Stormer in Makuhero City, Furno declined. Thus, Bulk went to Lunar Tratix to find the cure for the nanobots, where he tried to combat the Tratix Reptoid until Breez calmed it down. Bulk later witnessed Stormer restored to health.

Stormer led the team to New Stellac City, where they encountered Thunder and Corroder. The three engaged the two villains. The rookie team soon arrived, as did Xplode and Meltdown. A black hole appeared over the city and disarmed the six Heroes. After Stormer and Furno went into the vortex after Von Nebula, Bulk sought cover with the others until the criminals ran out of ammunition, and assisted Stringer in securing them. Bulk then returned to Hero Factory, along with the rest of the Alpha 1 Team. 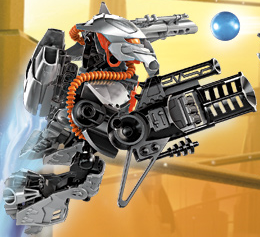 Bulk refitted with a jetpack, breathing tubes, and a Sonic Boom Weapon

At some point, Bulk was sent to confront Vapor. He attacked Vapor after being refitted, and was assisted by Furno and a Drop Ship Pilot.

Dunkan Bulk is a strong, slow-witted elite member of the Alpha Team. He secretly feels inferior for his lack of intelligence but makes up for it with raw power. He is shown to be a very courageous member of the team. Like Stormer, he dislikes working with rookies.

Bulk carries a Metal Sphere Shooter. During a mission where he fought Vapor, Bulk was outfitted with a Sonic Boom Weapon, jetpack, and breathing apparatus in addition to his shooter.