Difference between revisions of "Electricity Shooter"

The Electricity Shooter is a weapon given to Mark Surge after the breakout.

High-voltage pure energy is emitted from the Electricity Shooter, and can strike multiple opponents simultaneously. The insulated handle prevents energy feedback from affecting the user.

The Shooter can also be used as a temporary shield that protects the user from powerful energy blasts. The shield stops most projectiles, including all energy blasts, though non-metallic objects can phase right through it. It can also function as an electrical sword.

In Breakout Part 2 Surge used the Electricity Shooter to cut a third of an asteroid off to stop it from ramming a communications satellite. 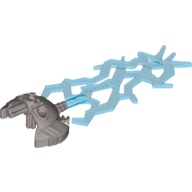 The Electricity Shooter piece, a recolor of the Lightning Shooter and Shield half from set 7169 Mark Surge, was included in the 6217 Surge set. It is co-injected from silver metallic and transparent blue plastic.