Breakout: Part One is the eighth episode in the Hero Factory television series. It originally aired on April 8, 2012 on Nicktoons. It is succeeded by Episode 9: Breakout Part 2.

The villains are seen in their cells as Furno and Rocka lead Voltix through the storage facility to put him in his new cell. Rocka describes his capture, saying that with the new upgrades, it was almost too easy.

Von Nebula's Black Hole Orb Staff is shown, and Voltix creates a projection of Von Nebula, that breaks the casing around the staff, causing it to create a black hole. This also causes all of the laser fronts on the villains' cells to shut down, and they escape in a breakout. Furno reports the breakout, and Stormer, Surge, Stringer and Evo arrive to help recapture the villains. They are unable to capture any villains, and all escape. Evo wants to chase them into the black hole, but Stormer stops him because Evo does not have enough experience.

Then, all of the Heroes are told to report to Mission Command via the intercom. Furno lets Evo know that he's always able to give him any advice he needs, and then walks into a door. When the Heroes have left the Storage Facility, Black Phantom and his Arachnix drop from the hole in the roof.

When the heroes reach Mission Command, Zib tells them that all of the villains have escaped, but they can be found easily because of tracking chips that were implanted during their processing. He then tells the Heroes that because such a large amount of villains have escaped, they will be sent individually to capture one villain each. He referred to this mission as “Catch 'Em and Cuff 'Em”. He is then brought a new set of Hero Cuffs, which will be given to the Heroes, by Quadal. He then tells the Heroes what upgrades they shall be getting, and which villain they shall be catching. Stormer is told that he shall be upgraded with an Ultra Mach Speed Cycle and Modular Scout Drones, for use in capturing Speeda Demon. Furno is upgraded with an Aqua Jet Pack and a Hydra Harpoon for catching Jawblade. Evo is upgraded with Anti Toxic Armour and a Tank Arm, which are resistant against Toxic Reapa’s toxins. Surge is issued Dual Plated Impact Armour and Alpha Magnetic Gravity boots, in order to catch Splitface in zero gravity. Stringer is given a Quad Amplitude Mega Decibel Sound Blaster to combat Voltix. Zib then asks Rocka if he was given a mission, but Rocka says that he decided to stay at Hero Factory, in order to be security. Zib questions who gave him those orders but is then called away to help direct launches.

When Stormer arrives on Kollix IV, he immediately finds a visual on Speeda Demon, and begins to chase him. He realizes that Speeda Demon is heading for the Stellar Navigation System. Stormer then catches up to Speeda Demon, and they begin combat whilst still on their bikes.

Evo searches for Toxic Reapa on Z'chaya, seeing cocoons of Toxic Reapa's species, he contacts Furno for advice. He wants to destroy them, but Furno believes that he could release them if he tries. Toxic Reapa then appears, and Evo begins to fight him. He throws his Hero Cuffs, but they miss, and return to him.

The episode then cuts to Stringer and Voltix by Tansari VI’s energy collection array. He is harnessing the power to create a weapon. Stringer finds him moving energy storage cells, and throws his Hero Cuffs, but Voltix shocks them away, rendering them useless. A gunfight ensues, and Stringer notices that his Cuffs aren't returning to him.

Meanwhile, Furno is underwater on the planet Scylla, and looking for Jawblade. Jawblade finds Furno easily, as Furno was making a large amount of noise. Furno throws his Cuffs, but discovers they don't work underwater, and just float slowly towards Jawblade.

Surge is on the Sigma Sigma Communications Satellite, where he has tracked Splitface to somewhere in the asteroid belt. Surge sees a massive asteroid, which he begins to travel to by jumping between asteroids. He then finds Splitface, who is having an argument with himself. Surge is then attacked and flung into space.

Meanwhile, Stormer is still chasing Speeda Demon, and fires his drones. They target Speeda Demon, but they ultimately miss, and are destroyed when Speeda Demon rides through a tunnel. Whilst Speeda Demon was distracted, Stormer managed to catch up with him and overtake him.

Back on Tansari VI, Stringer is looking for his hero cuffs. When he is attacked by Voltix, he sees them, and runs to grab them. Voltix begins to absorb energy from the lightning, and shoots Stringer, causing him to have an electric shock.

Meanwhile, Surge is floating around space, and fortunately finds his Cuffs. He begins travelling back to the asteroid, where Splitface is still arguing with himself. Surge shoots Splitface, and a fight begins. He takes out his Electricity Shooter, and begins to fire at Splitface. He is shot by Splitface's Infecticide, and is thrown in to space. He then finds himself on the massive asteroid, and heading towards the shield.

At this time, back at the Hero Factory, Zib realizes that no villains went in to hiding, and feels like it is a coordinated plan. Suddenly, a large group of Arachnix appear, and take all Hero Factory's Employees as prisoners. Then, Black Phantom appears, takes over Hero Factory, and locks all the doors, locking Rocka in the Villain Storage Facility. He then puts up the Failsafe Shield, locking everyone out of the Hero Factory. 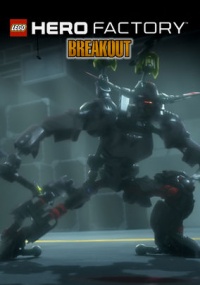