The Evo XL Machine was a Battle Machine used by Nathan Evo.

The Evo XL Machine was the largest of the Battle Machines, equipped with numerous offensive capabilities. It had an attached missile launcher with four equipped missiles, as well as a Goo Shooter for projectile use. Additional connection points were also included so that it could be loaded with more weapons.[Product info]

In addition to weapons, the XL Machine featured a rotating torso to provide full battle coverage, an ejectable cockpit, and a Canister for capturing Jumpers. 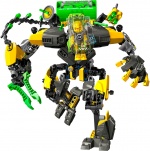