"Don't you understand? Hero Factory's reign is over. Every moment you Heroes exist from now on, you do so only through my mercy."
― Fire Lord, Ordeal of Fire 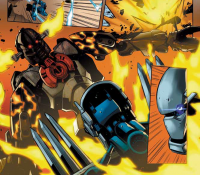 Fire Lord was once a mining robot. At one point in time, he was working on Tallos 5, where he encountered the Hero Preston Stormer.

As part of an upgrade to make the robots more efficient, Fire Lord was given the ability to absorb fuel directly into his hands. However, the excess amounts of fuel affected Fire Lord's wiring, and he eventually malfunctioned, developing a plan to dominate the universe by seeking power to feed on. Fire Lord also gathered up a team of other malfunctioning mining robots: Nitroblast, Jetbug, and Drilldozer.

During Fire Lord's string of raids on fuel stations, he and his gang attacked Tanker Station 22, which forced Hero Factory to send Stormer and some of the Alpha 1 Team rookies to combat the attacking robots. However, Fire Lord's gang was able to overcome the weaker heroes. Fire Lord himself knocked out William Furno, while Drilldozer defeated Natalie Breez and Jetbug overcame Mark Surge. The rookies regrouped, and attempted to escape with the station workers, but were cornered by the villains. Fire Lord proclaimed his dominance over Hero Factory, but his attention was diverted by Surge, who drew the fire of the robots away from the Heroes, who escaped with the workers.

Fire Lord was later warned by Nitroblast when the three Heroes returned, and Fire Lord attacked Stormer. When he realized that Stormer still did not recognize him as the former mining bot he met on Tallos 5, Fire Lord related his history, and absorbed more fuel, overpowering Stormer. Julius Nex and Nathan Evo arrived to assist the Alpha team, and Fire Lord's minions were swiftly apprehended. Fire Lord went to absorb the largest energy deposit, but was rammed with a Hero craft, piloted by Surge, and his hand was ripped off. The Fire Lord was captured, and he was taken into custody to be helped by Hero Factory.

Built for mining, Fire Lord was upgraded with the ability to directly absorb fuel into his hands, vastly increasing his power. During his fight on Tanker Station 22, one of these hands was forcibly removed. Due to the amount of fuel he has absorbed, Fire Lord is megalomaniacal, and believes he is much more powerful than anyone else, which gives him the right to dominate the universe. He has an insatiable urge to absorb more energy, and his robotic body is constantly at dangerously high temperatures, capable of leaving burns on things nearby.

Fire Lord carried a Lava Blaster, a weapon based upon the Dual Fire Shooter used by William Furno, and a Lava Sphere Shooter. He also possessed boosters on his back which allow him to fly.

Set 2235 Fire Lord was released as a large box set in the first half of 2011. The set contains 125 pieces, including a firing Lava Sphere Shooter.

"Once you taste the power, you can't stop. What is evil more than wanting something so much you'll do anything, hurt anyone, to get it?"
― Fire Lord, Ordeal of Fire