Frost Beast was an Ice Creature that had been mutated by a Brain. 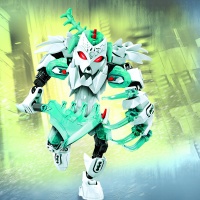 The Brain was eventually removed from Frost Beast during a fight with the Heroes. He then returned to his icy homeland.

After being transformed by the Brains, Frost Beast was turned into a dangerous and vicious enemy for Hero Factory, bearing tough ice armor and sharp frost claws and having powerful ice breath.

The set 44011 Frost Beast was released in mid-2013, as part of the Brain Attack series. It contains a light blue Brain that attaches to its head, and included a Hero Core not used in the construction of the set, but instead for use in the Brain Attack game to get 600 points. The Frost Beast set can be combined with 44010 Stormer to create a non-canon combiner model.