The Furno Jet Machine is a Battle Machine used by William Furno.

Furno designed and constructed the Furno Jet Machine using the Remote Builder during the invasion of Antropolis City. After flying around the city fighting Jumpers, he arrived to save Dunkan Bulk and Mark Surge from a Jaw Beast. The Jaw Beast took down the Jet Machine and removed Furno from the cockpit, though Furno was saved by Daniel Rocka in his Rocka Stealth Machine.

The Furno Jet Machine is a bipedal machine, equipped with dual fire blades that can launch flaming projectiles and adjustable jet motors. It also features a bulletproof visor, an ejectable cockpit, holstered fire extinguisher, and a furnace Canister. 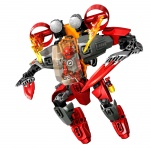 Set 44018 Furno Jet Machine was released as part of the first half of the Invasion From Below wave. The set contains 79 pieces.