Difference between revisions of "Hero Pod"

Hero Pods are vehicles that Hero Factory uses to deploy Heroes into action on missions. 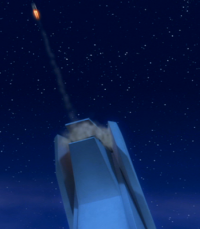 A Hero Pod launching from the Hero Factory

The Hero Factory company developed Hero Pods to get Heroes to missions faster. The pods can either be launched from the top of the Hero Factory, or carried by a Drop Ship before being deployed below.

At Lemus 2, William Furno used a decoy Hero Pod to draw Rotor's fire while the heroes moved in. A similar trick was used when Furno ejected from the Hero Pod as it sped at Corroder during another mission. The pod rammed into Corroder, and was destroyed. Furno, Mark Surge, and Natalie Breez were launched in Hero Pods to help Alpha 1 Team on New Stellac City after Thunder's nebula gases cut the MissionCam feed.

A pod carrying both Nathan Evo and Julius Nex arrived at a a besieged refueling station to assist Alpha 1 Team.

Hero Pods feature engines to provide safe landings for the Hero inside the pod. They have an autopilot mechanism, and move using jets. However, they require Drop Ships for long distance and intergalactic travel.

The plastic canisters for all Hero sets from 2010 to 2011 represent Hero Pods. The constructed Hero sets could be stored inside the stackable canisters, each of which could be carried and deployed from set 7160 Drop Ship. 2010 canisters have lids in colors matching the hero set included, while early 2011 canisters have bright orange lids. Mid-2011 canisters feature bright yellowish-green lids.