Jaw Beasts were a type of mutated Jumper.

The Jaw Beast was one of the types of mutated Jumpers attacking Antropolis City after the city accidentally uncovered their nesting grounds. During the response by Hero Factory, Mission: Invasion From Below, one Jaw Beast attacked Mark Surge and Dunkan Bulk by breaking a section of an elevated tunnel and throwing it at them. William Furno in his Battle Machine flew in to save his two fellow heroes and engaged the Jaw Beast, but was knocked down and out of his Battle Machine. Daniel Rocka uncloaked his Battle Machine and saved Furno by firing his Goo Shooter at the Jaw Beast. 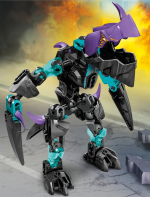 Set 44016 Jaw Beast Vs. Stormer was released at the beginning of 2014 as part of the first wave of the Invasion From Below figures. The set is comprised of 49 pieces, 37 of which make up the actual beast; the rest of the pieces go to Stormer and his weapons.