Stringer was created at Hero Factory and became a member of Alpha 1 with Preston Stormer, Von Ness and Dunkan Bulk under the command of Thresher. Stringer and Bulk arrested Toxic Reapa as he attempted to rob a museum with Jawblade, although the latter escaped. Stormer was sent with Stringer to go watch over a mining move after Stormer had seen the mission by Thresher on the mission tablet. There was no move however, just mining robots prepared to attack the Heroes; however XT4 appeared and saved them, saying he was the new Hero for Alpha 1. As he was brought back to Hero Factory, XT4 quickly turned evil and escaped on a Dropship. Stormer and Stringer's Dropship stayed airborne while Von Ness and Bulk went down on Asteroid J-54, where XT4 was engineering a prison break. They became trapped between a mining freighter with its engines rigged to detonate by Splitface and Black Phantom's ship. Black Phantom contacted Stormer and informed him of the Legion of Darkness before Stringer sent the ship toward Black Phantom. The criminal's ship sped off and the explosion from the freighter knocked Stormer and Stringer out. Thresher saved them and brought them back to Hero Factory where it was announced Akiyama Makuro was closing the Hero Factory. Stringer, Bulk, and Von Ness left but were recalled by Stormer. They arrived in time to stop Black Phantom and his legion from destroying Hero Factory, rescuing Thresher and Stormer. Due to their success, Makuro re-opened Hero Factory.

Another time, Stringer was dispatched to a freighter whose crew had gone in sleep mode. There he saw Core Hunter was on the ship, but they were both attacked by an extremely powerful winged creature. They were forced to band together to try and defeat it, but realized it only wanted to escape. Stringer navigated the creature through the airlock system while Core Hunter controlled it; however, the villain left Stringer to die in space. The creature saved Stringer and threw him in Core Hunter's ship, and Core Hunter left in Stringer's. However due to Hero tracking chip in Stringer's vehicle, the ship piloted Core Hunter straight to Makuhero City where he was jailed. 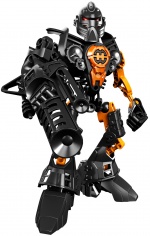