Hero Factory is based in a giant structure of the same name, the Hero Factory. It is one of the most famous buildings in the universe, and is instantly recognizable. 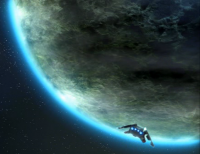 Penitentiary 1331 is a prison under construction. When Corroder attacked the construction site, Heroes Dunkan Bulk, Jimi Stringer, Mark Surge and later William Furno attempted to apprehend him, but Corroder managed to escape.

The Etamin II planet briefly banned Hero teams on the planet after cleaning bots attempted to be heroes and caused serious damage. However, the Rho 3 Hero team proved the Heroes were not at fault, and the bans were subsequently reversed.

The planet Earth is inhabited by an organic species known as humans. A dragon was spotted at a North American high school after an alert, and the Epsilon 4 hero team contained the dragon.

The explosives plant on Lemus 2

When the planet Almaak IV mysteriously disappeared, the Alpha 1 Team was called in to investigate. They discovered that officials of Almaak V had cloaked it in order to provoke a war with the worlds of the Prima Giedi system. 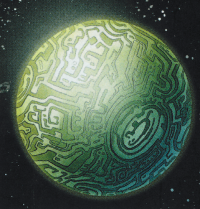 Quatros is a protected jungle planet teeming with wildlife that posesses a core of Quaza. Witch Doctor recently arrived to drain the planet of its Quaza, and the Alpha 1 team was sent to intervene.

Merak 9 is a mining asteroid that XPlode and Rotor tried to steal C-4000 from. Their attempt was thwarted by Alpha 1.

The moon known as Lunar Tratix is home to the Tratix Reptoids. It was once ventured to by several Alpha 1 members to help find a cure for Stormer.

Mekron City is a city on an asteroid. It has a police department run by chief Drax, and it once spotted Vapor. Drax was infected by nanobots by Meltdown, and attacked his ally Stormer when he arrived. Drax was defeated, though Stormer was infected here as well.

Von Nebula created a gigantic Black Hole as his base of operations. Stormer and Furno became sucked within it, and resisted the pull of the black hole. Furno dropped anti-gravity rings into the hole, and it began to implode. Von Nebula was sucked within his Black Hole Orb Staff, and the heroes escaped.

The notorious Yequee Gas Clouds are a 14 million mile long stretch of Yeq particles, that eat steel and metal and provide trouble for travelers. Mu 14 removed many Yeq particles.