Makuhero City is a main location in the universe, a large, modern city, located on a small planet in the Makuhero Belt. Millions of sentient robots live in the city.

Makuhero City was created and developed by workers of the Hero Factory company, building around the focal point of the factory itself. The city became a sprawling metropolis, acquiring a great number of inhabitants. During the Legion of Darkness' attack on Hero Factory, a stolen Drop Ship Black Phantom was piloting released Jawblade into Makuhero Reservoir, and the aquatic criminal swam to Hero Factory's power lines and disconnected them. However, the power was eventually restored after the Legion was defeated. 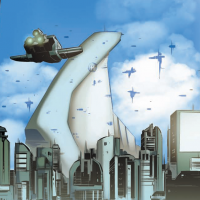 Since it was based around the Hero Factory, a number of billboards and advertisements feature Heroes from the corporation. After being infected by nanobots from Meltdown, Preston Stormer went rogue and escaped into the city. He was trailed by William Furno, and they met at a giant billboard of Stormer in the city. They began to fight on the rooftops, damaging buildings and billboards. Stormer twisted Furno's hand so that he torched the billboard, but Furno reminded Stormer of Von Ness, and Stormer overcame the nanobots. After a later mission, the heroes arrived at Makuhero city with the captured XPlode, Thunder, Corroder, Meltdown, and Von Nebula, and were covered by the evening news.

Black Phantom's second attempt to take over Hero Factory resulted in a mass breakout of Hero Factory's containment prison. Most of the villains escaped to other parts of the universe; one, Core Hunter, remained behind in the city, but was soon chased away by Dunkan Bulk.

Soon after, swarms of creatures controlled by Brains began an attack on Makuhero City, coming from all areas over the planet. Alpha 1 Team immediately responded, along with other Heroes, fighting the creatures. Once Bulk figured out how to disable the Brains, the creatures were defeated. Dragon Bolt then arrived and bored into Hero Factory, but the Heroes were distracted while dealing with Brain-controlled Mark Surge instead. Using a booster jet pack, Rocka chased Dragon Bolt into the sky above the city, and jumped on its back and freed it from the Brain's control. The uninfected creatures helped the Heroes repair the city and returned to their homelands.

The city narrowly avoided destruction when the Heroes stopped the Valiant from crashing and destroying the city.

The early city was founded by Makuro, but was taken over by Von Nebula after Black Phantom destroyed Hero Factory. It was renamed into Von Nebula City and became the center of the Citadel's empire. The city had rules to encourage power and robbery and theft, and order was maintained by jolter robots. When the prime reality Alpha Team arrived, they accidentally alerted the universe's Brains, encouraging them to attack. In the ensuing events at the Citadel, Von Nebula was killed and the Brains defeated by the Alpha Teams of both dimensions.

Makuhero City is filled mostly with tall buildings, with the Hero Factory standing as the tallest structure in the city. There are assorted billboards on the buildings, and a very strong robot community.

Merrick Fortis has established a secret base in Makuhero City for his Recon Team.

The city receives power from main power lines, and water from the Makuhero Reservoir.

As the base for Hero Factory, all the staff and heroes for Hero Factory live in the city. It serves as their base of operations across the galaxy. The Factory has controls for lockdown and emergency protocol for the entire city.

The city primarily is comprised of many civilians that live under the protection of Hero Factory. 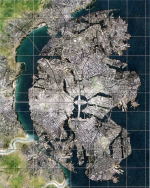 Makuhero City viewed from above