Difference between revisions of "Mark Surge"

"No Hero is useless... one can save them all."
― Mark Surge, Ordeal of Fire

Mark Surge is the youngest member of the Alpha 1 Team of Hero Factory.

Surge was recently created alongside fellow Heroes Natalie Breez and William Furno. Due to his experimental nature, Surge was convinced that something went wrong with his creation. Surge, Furno, and Breez were put into the same rookie team under the overall command of Alpha 1, led by Preston Stormer. 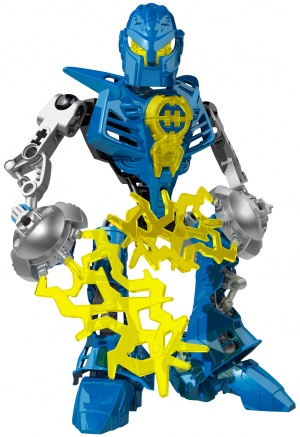 Surge and Breez witnessed Furno's failed attempt to apprehend Rotor on Merak 9 and advised him not to overwork himself just to impress Stormer when he replayed the mission in a simulator for hours. Stormer then took the rookies on a training mission, but was called to aid the Lemus 2 explosives plant. There the four engaged XPlode and Rotor. Stormer was knocked out, and as Furno took on Rotor, Surge fended XPlode away from the explosives. XPlode escaped, but Furno managed to arrest Rotor.

After repairing the damage on Lemus 2, Surge was sent with Breez, Dunkan Bulk, and Jimi Stringer to Tantalus 5, where Corroder was attacking a prison construction site. As Breez evacuated the workers, Surge was left with the two senior Alpha 1 members. Bulk saved Surge from being crushed by girders, but was pinned under them himself. While Stringer drew Corroder away, Surge tried to help Bulk, but was unable to free him. In order to protect Bulk, the three created a Hero Cell. Before Corroder could break the cell, Furno arrived. Breez soon returned in the Drop Ship, which Furno used to intimidate Corroder into fleeing.

Stormer later took the three rookies to Mekron City where they encountered Police Chief Drax, one of Stormer's friends, who attacked them in a nanobot-induced madness. Meltdown arrived and infected Stormer with the same nanobots, and then fled. The nanobots took full control upon the team's return to Hero Factory and Stormer went rogue. Surge traveled with Breez, Bulk, and Stringer to Lunar Tratix to find a mineral that would cure Stormer. When a Tratix Reptoid tried to attack Breez, Surge attempted to stop it, and the creature shifted its focus to him. However, Breez was able to communicate with the reptoid using her special programming, and it released Surge and dug up the mineral for them. The four Heroes returned to Makuhero City, where a cure was synthesized for Stormer.

The Alpha 1 Team was sent to New Stellac City, where they encountered Thunder and Corroder. The three rookies were sent in to help and given new Particle Separators for the fight. Upon their arrival, they were ambushed by Thunder, Corroder, and the recently arrived XPlode and Meltdown. The senior Alpha 1 Heroes rescued them and Surge fought alongside Bulk until his weapons were sucked into a black hole that formed over New Stellac. The criminal mastermind Von Nebula revealed himself, and Stormer and Furno went into the black hole to confront him. Surge and the others dodged villains' fire until their ammunition ran out. The Heroes then launched a counter-attack, during which Surge and Breez subdued Corroder. XPlode fired his Explosive Spikes as a last attempt to win the fight, but the Heroes used their particle separators to survive the attack, though Surge's temporarily malfunctioned aferward. Stormer and Furno returned, having defeated Von Nebula, and the villains were taken back to Hero Factory.

Surge and his teammates went with Stormer to Tanker Station 22, where the Fire Lord was attacking the refueling station. The Heroes were quickly overpowered, and attempted to retreat with the remaining station workers. However, the four villains surrounded the group, and Surge sacrificed himself by destroying a group of fuel-cells to draw the enemies away so the others could escape. He was later caught and imprisoned. The criminals planned to hold Surge for ransom, but he managed to escape. His teammates, now upgraded to 2.0 forms, returned to the station, intent on freeing Surge and capturing the villains. Surge sent an alert to Furno and Breez to warn them of an impending attack from the villain's ship, piloted by Jetbug.

Surge later commandeered the villains' ship from Jetbug and used it to severe the Fire Lord's fuel-siphoning hand from a large stack of fuel cells, giving Stormer the opportunity to subdue the villain.

At the Hero Factory, Surge was upgraded to 2.0 form as well, and was commended for his bravery at a special ceremony, where he was presented with his Ice Spear Blaster. 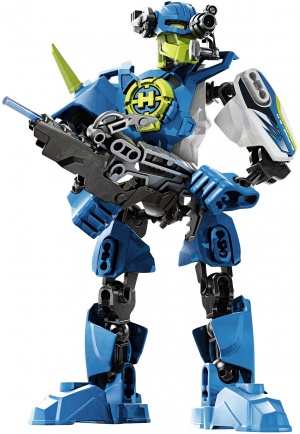 Though he is convinced that something went wrong with his construction, Surge is nonetheless an able, if occasionally clumsy, Hero. Like his fellow rookie teammates, he was built with experimental designs, though Surge resented the constant examination this required. He is known to be defiant and emotional. Surge attempts to be rational, but is easily set off. He is also very strong, but his inexperience leads to an inability to use it properly all the time.

After the upgrade, Surge now possesses more power and fire-resistant armor, as well as a scope, and uses his new tools to act as the sniper for the team.

Before his upgrade, Surge wielded two Lightning Shooter and Shields, which allowed him to shoot electrical bolts and project electric shields. He was also seen using a long-distance thermo scope for reconnaissance. He now carries an Ice Spear Blaster, allowing him to shoot ice projectiles from a long range.

Set 7169 Mark Surge was released in mid-2010 as part of the first wave of Hero sets, which also included Stormer, Bulk, Stringer, Breez, and Furno. This set contained 19 pieces.

In early 2011, Surge was re-released in set 2141 Surge 2.0. This 30-piece set was part of a line which also included Stormer 2.0, Furno 2.0, Evo 2.0, Nex 2.0, and Breez 2.0. Instructions for a combi model using parts from Surge 2.0 and Nex 2.0 were included on the Hero Factory website. Surge 2.0 was also one of the first sets to use the HeroPad system, which allows users to enter codes from the bottom of set canister lids in order to unlock special prizes in an online game.