"The day you take me on, Hero, is the day you burn."
― Meltdown, Hero Factory Promotional Magazine

Meltdown is a villain who previously worked under the command of Von Nebula.

Meltdown was originally constructed with corrupted parts with the specific goal of engineering a villain.[1] As a criminal, Meltdown committed numerous thefts and assaults, along with highly notorious crimes such as sabotaging an iridium mine and destroying an entire city[1][2].

Meltdown was eventually hired by Von Nebula for his attempts to destroy Hero Factory.

After Corroder failed in his attempt to destroy Penitentiary 1331 and the Alpha 1 Team, Von Nebula sent Meltdown to use malignant nanobots to take control of Preston Stormer. Meltdown arrived at Mekron City, and infected Police Chief Drax, so that Stormer, an old friend of the chief, would respond to an alert. Stormer arrived with William Furno, Mark Surge, and Natalie Breez, and succeeded in subduing Drax. Meltdown ambushed them and blasted his nanobot-infested nuclear waste at Furno, forcing Stormer to intercept the attack himself and thus become infected. Meltdown then escaped the city and returned to Von Nebula. However, Stormer was eventually cured of the nanobot infection.

Von Nebula sent Meltdown and XPlode to help Thunder and Corroder destroy Stormer's team at a final stand in New Stellac City while Von Nebula faced off with Stormer and Furno in the black hole created by his Black Hole Orb Staff. After the black hole disarmed the Heroes, Von Nebula's henchmen pursued them and continually fired their weapons as the Heroes were being chased. However, the Heroes managed to stay out of range until the criminals ran out of ammunition, including Meltdown's nuclear waste. Meltdown and the rest of the unarmed villains were then arrested.

Along with every other criminal, Meltdown escaped the Hero Factory in the massive breakout initiated by Voltix.

Meltdown is completely psychotic, though very intelligent, and dabbles in radioactive materials, using degraded nuclear radiation in his equipped tanks. Having perfect aim with these materials, he enjoys using them to inflict suffering and death upon his enemies. Like his employer, Meltdown was committed to the destruction of Hero Factory, and the corporation considers him Von Nebula's most destructive and vicious employee.

Meltdown carries the Radioactive Sludge Shooter, a customized Meteor Blaster which draws from the tanks on Meltdown's back. He also possesses a tentacle. 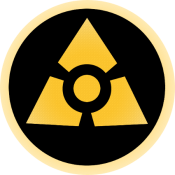 Set 7148 Meltdown was released in summer 2010. The set has 50 pieces including a firing Radioactive Sludge Shooter. The set also includes a sticker sheet for decorating some of Meltdown's parts.