This weapon shoots very dense cobalt-nickel spheres at extremely high speeds. The weapon has a rapid-load mechanism, generating the ammunition from a compact memory wire. The Metal Sphere Shooter can fire up to 20 rounds per minute. The weapon also includes laser sights and guidance sensors for greater accuracy. The weapon itself is heavy, so only stronger heroes are comfortable using it as their primary weapon. Bulk no longer uses the Metal Sphere Shooter, having received new weapons after the breakout.

In Trials of Furno, Bulk used this weapon to fight back against XPlode and Rotor. 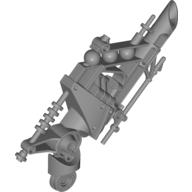