"I'm my own woman; I'll protect you!"
― Natalie Breez, Ordeal of Fire

Natalie Breez is a hero working at the Hero Factory. 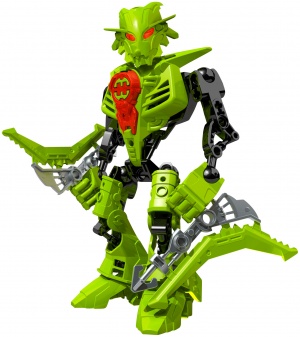 Breez was one of the first heroes created with an experimental program that linked her with the natural world. She was placed on a rookie team with Mark Surge and William Furno, the team leader. The team was placed under the command of the Alpha 1 Team.

When William Furno returned from an unsatisfactory mission with the Alpha 1 team, he threw himself into training. Breez and Surge warned him not to push his limits just to please Alpha 1 leader Stormer. Stormer later took the rookie heroes out training, but they received a call to head to Lemus 2, an explosives plant that was being raided by XPlode and Rotor. When the heroes got there, Stormer was knocked unconscious, and Breez tended to him while Surge scared XPlode, and Furno apprehended Rotor.

The villain Corroder attacked a prison facility still under construction, and Breez went there from locking up Lemus 2 with others. Breez took the injured workers to a medical unit while Surge, Dunkan Bulk, and Jimi Stringer fought Corroder. Furno eventually arrived to fight Corroder, and Breez brought the ship to confront him as well, claiming that it was full of Heroes in order to scare the villain off.

At the Hero Factory, Stormer's mind was taken over by the nanobots, and he went rogue. To find a cure for Stormer, Breez went with Surge, Stringer, and Bulk to Lunar Tratix, where they encountered a Tratix Reptoid. Breez used her ability to talk to the reptoid, and it dug up the rare mineral they needed to make the cure for Stormer.

After the Alpha 1 Heroes went to New Stellac City to arrest Thunder, the rookies were eventually called to assist them, and outfitted with new technology for the task. The team was ambushed by Thunder, along with Corroder, XPlode, and Meltdown, and confronted by Von Nebula. While Furno and Stormer went after Von Nebula in his black hole lair, the other Heroes exhausted the villains' ammo supply using their Particle Separators. Furno and Stormer returned, having defeated and trapped Von Nebula in his Black Hole Orb Staff, and the criminals were confined in the Hero Factory.

Stormer took the rookies to a Tanker Station 22 under attack by the Fire Lord. Breez ran up against Drilldozer, but was defeated. She supervised evacuation procedures of the civilian workers, as Stormer ordered a retreat. While attempting to evacuate the last group of workers, the Fire Lord surrounded the group with his minions. Surge broke from the group, and drew the criminals away, giving Stormer and the others the time to escape. Stormer convinced Akiyama Makuro to give the three an upgrade to save Surge. The Heroes were successfully upgraded, and trained in the virtual training sphere to control their new forms.

The Heroes returned to Tanker Station 22, and confronted the villains. During the battle, Breez's weapons got caught in Furno's, and they tried to separate when Drilldozer attacked them. A Hero Pod arrived, and Julius Nex emerged to free the two stuck heroes. Breez defeated Drilldozer, and hero-cuffed him. Surge arrived in a Hero craft and defeated the Fire Lord, and they all returned to the Hero Factory. Surge received an upgrade, becoming a 2.0 hero, and Breez presented Surge with his Ice Spear Blaster at the event honoring Surge's bravery.

Breez has the ability to communicate with all known types of animals due to a new program in her core. She cares deeply for innocent lives everywhere, but she frequently insists that she has no romantic interest in any of her teammates, and that their job as heroes is what is most important to her. She is confident in her own ability and refuses to be protected by others. Diplomatic in nature, she is also a fierce fighter when it comes to defending innocents. She is typically the first to obey Stormer or volunteer herself (and her peers) for more training, contrasting Surge's and Furno's more open willingness to criticize Stormer.

She retained her abilities when she was upgraded to a 2.0 form, and now has fire-resistant armor and other upgraded features. She is also skilled in knife and hook throwing.

She carried Energized Dual Boomerangs in her 1.0 form, and later Multi-Tool Blades after her upgrade. 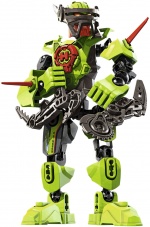 Natalie Breez was first released in mid-2010 as set 7165, part of the original Hero line which also included Furno, Surge, Stormer, Bulk, and Stringer. This set contained 19 pieces, which could be combined with parts from Stormer and Furno in order to create Lucas Valor using instructions from a LEGO Brickmaster Magazine issue.

Set 2142 Breez 2.0 was released in early 2011 as part of the Hero 2.0 line, which also included Stormer 2.0, Evo 2.0, Nex 2.0, Furno 2.0, and Surge 2.0. This set contained 29 pieces. It was also possible to combine parts from Breez 2.0 and Stormer 2.0 in order to create a new model using instructions on the Hero Factory website. Breez 2.0 was also one of the first sets to utilize the Hero Pad system, which allowed users to enter in codes found on the bottom of set canister lids in order to unlock special online game prizes.