Difference between revisions of "Nathan Evo"

Nathan Evo is a rookie Hero from the Hero Factory, and a member of the Alpha 1 team.

Evo was one of the heroes sent to investigate the tunnel which workers disappeared in. He went inside with his Turret Machine when he was attacked and was forced to eject from his Machine. He later helped fight off the first wave of Jumpers and used his XL Machine to fight the Splitter Beast. He later went underground with the other heroes in order to free his comerades. He disassembled his XL Machine to make his Spider Machine. He later fought the Queen Beast head on and almost was killed by her, but was saved by Breez. 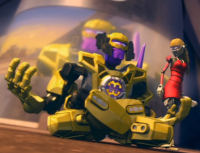 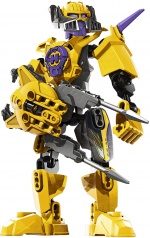 Set 44012 Evo was released as part of the summer 2013 "Brain Attack" wave. This 51-piece set included a Tornado Staff, a back-mounted scabbard, and a new underwater breathing visor element hinged so that it could open or close over Evo's new helmet. Like the other Hero sets in this wave, the set also included locking clamps to secure the Hero Core, which was the same style as the previous series and included a code for 400 game points in the new game Brain Attack. It can be combined with 44013 Aquagon to create a non-canon combiner model.