Professor Zib served as the Chief Mission Manager of Hero Factory during Alpha 1 Team's fights against Von Nebula, overseeing the Alpha Team with the help of his assistant, Quadal. During XPlode and Rotor's attack on a C-4000 explosives shipment, he managed Preston Stormer's Alpha Team as well as the rookie hero named William Furno. When the attack was over and both XPlode and Rotor escaped, Akiyama Makuro talked with Zib about the intensity of Stormer's words towards Furno, and Furno's abilities to be a team leader while still a rookie.

Zib also managed the mission to the Lemos 2 explosives plant that sent Stormer, Furno, Mark Surge, and Natalie Breez to defend the plant and its explosives from XPlode and Rotor. 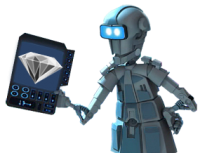 Later on, Hero Factory received a distress call from Penitentiary 1331, a prison planetoid still under construction. Due to its status as a still-incomplete prison, Zib sent rookies Breez and Surge with two members of the Alpha Team, Jimi Stringer and Dunkan Bulk, although Stormer was unable to go help lead his team in the field due to a low hero core. Zib managed the mission with the help of Stormer, helping the team decide whether or not to form a Hero Cell to protect the power-deprived Bulk and the other heroes from Corroder's attack until backup could arrive. With no appropriate teams to back up the heroes, Zib and the newly recharged Furno convinced Stormer to allow the rookie hero to go to Penitentiary 1331, after being refitted with acid-resistant armor at the refitting tower. Furno eventually beat Corroder, and helped get the other heroes back to the factory safely, although they were unable to capture Corroder.

He also helped develop a code that would eradicate Meltdown's virus that was shot into Stormer, the virus having turned Stormer into an unwilling minion of Von Nebula. Stormer got enraged due to Zib's instructions from the science team. Later, Zib watched Thunder knock out the live feed of the senior Alpha Team member's latest mission, and got enraged at the rookies playing in zero gravity. Zib gave them particle separators for the mission that lied ahead.

Zib met Breez, Stormer, and Furno after they had to flee the Fire Lord and leave Surge behind to rescue all the civilians. Mr. Makuro refused to upgrade the three until Zib convinced him that the three would be soundly defeated if not put in Upgrade. Zib and Quadal oversaw the upgrading of the trio, and in virtual training tried to help them master the new 2.0 bodies. Shortly after Alpha 1 launched, Zib sent Julius Nex and Nathan Evo to aid the Alpha Team. Zib later upgraded Surge as well.