Nitroblast is a villain that worked with the Fire Lord. 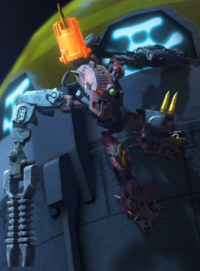 Nitroblast was a Mining Robot who became insane and joined the Fire Lord's gang. During his time as one of the Fire Lord's criminals, he became wanted in much of the galaxy for arson, assault, extortion, and theft of government property.

Nitroblast accompanied the Fire Lord to Tanker Station 22, where he helped fight and drive off the Alpha 1 Team. When the Heroes were pulling back, Nitroblast fired on them, but they still escaped with the station's workers when Surge threatened to destroy some of the station's fuel. Surge was captured by Jetbug, and the criminals took control of the station.

Nitroblast noticed the arrival of the newly upgraded Heroes when they returned, and warned the Fire Lord. Nitroblast watched as the Fire Lord dueled Preston Stormer and as Breez and Furno tried to escape Drilldozer. When Nathan Evo and Julius Nex arrived, Nitroblast, Drilldozer, and the Fire Lord inquired about Evo's methodical nature before he suddenly attacked them. Nitroblast tumbled off the edge of the station, but he was saved and hero-cuffed by Nex. The Heroes brought the villains back to the Factory, to be treated for their instabilities.

He later, along with all other villains, escaped the Hero factory in the Breakout.

Nitroblast is the craftiest of the Fire Lord's henchmen, often having been the one to bring down security systems before a break-in. He is an expert safecracker. He is also deeply loyal to Fire Lord, a point of derision even among his fellow criminals.

Nitroblast carried a Lava Sphere Shooter and a Plasma Blowtorch.

Set 2194 Nitroblast was released in the first half of 2011. It contains 57 pieces including a firing Lava Sphere Shooter.