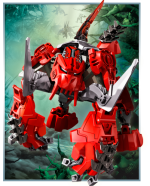 When Witch Doctor arrived on Quatros intent on stealing the planet's reserve of Quaza, several Raw-Jaw were captured by Witch Doctor, and had corrupted Quaza spikes planted on them. Witch Doctor tasked the Raw-Jaw with mining Quaza.

A Raw-Jaw, along with a Waspix and a Scorpio, confronted the Alpha 1 Team after they had encountered Witch Doctor. However, Witch Doctor recalled the three creatures to perform other tasks. Despite pleading with the Witch Doctor many times to cease mining the mineral, a Raw-Jaw was continually forced to work until he had removed the last of the Quaza from the core of Quatros. When Witch Doctor was attacked by the freed Scorpio, he commanded the Raw-Jaw to fight the creature. Raw-Jaw eventually defeated the scorpion, throwing it over the edge of the mining site.

The Raw-Jaw was later freed from Witch Doctor's control by Alpha 1 member Jimi Stringer, and thanked the Hero before running off into the jungle; the rest of the Raw Jaw were also freed.

Raw-Jaw use their great strength and agility to protect themselves from other predators. Their physical appearance resembles that of a gorilla with the tusks of an elephant, which can be used to impale prey or battle intruders in their territory. With the Quaza spike implanted, Raw-Jaw were far more aggressive than normal and unwillingly served Witch Doctor.