Rotor is a dim-witted criminal that was often paired with XPlode by Von Nebula.

Rotor was wanted by the Hero Factory for extortion, sabotage, and assault across the galaxy. He was eventually forced to flee his homeworld after becoming wanted for treason. If he was to be brought back there, he would face being disassembled.

After being hired by Von Nebula, Rotor was paired with XPlode on many missions. The duo was sent by Von Nebula to raid and capture a shipment of C-4000 explosives guarded by Hero Factory's Alpha 1 Team. The Heroes nearly defeated the two villains, but XPlode betrayed Rotor and escaped, leaving Rotor to the heroes. The leader of the Alpha 1 team, Preston Stormer, assigned a rookie Hero named William Furno to hero-cuff Rotor; although the young Hero took Rotor down, the criminal used a miniature Meteor Blaster to escape the Heroes and return to his employer.

Rotor in Trials of Furno

Soon after the C-4000 raid, Rotor was again teamed up with XPlode to attack an explosives plant on Lemus 2. The two successfully stole several crates of explosives from the plant and had just exited when Rotor spotted a falling Hero Pod and shot it down. However, the destroyed Hero Pod was a decoy that Stormer had used to allow Furno to land in his team's Drop Ship along with two rookie Heroes: Natalie Breez and Mark Surge. When Stormer and the rookies attacked, XPlode ordered Rotor to shoot down Stormer, which would leave the rookies to be picked off one at a time. The two villains' weapons dislocated some of Stormer's wiring, forcing Breez to repair the hero, while Furno and Surge engaged Rotor and XPlode. Furno ran into the Drop Ship to retrieve his motorbike and used it to evade Rotor and XPlode's fire. The criminals tried to reach the stolen explosives so they could use them against Furno, but Surge used his Lightning Shooter to keep them from the stolen crates. Cornered by the heroes, XPlode abandoned Rotor once again. Rotor attempted to use his miniature Meteor Blaster to escape again, but Furno managed to put the Hero Cuffs on him before he could reach his weapon. Rotor was then imprisoned by the Hero Factory.

Rotor was among the many villains who escaped during the Breakout.

Rotor is a twisted, sycophantic lackey of XPlode's, wanted for numerous crimes across the galaxy. He is very fast, which makes him easily able to dodge any Heroes' attacks, especially when in flight.

Rotor could use his rotor blades to both fly and attack. He also carried a Meteor Blaster and a Biohazard Gas Shooter. 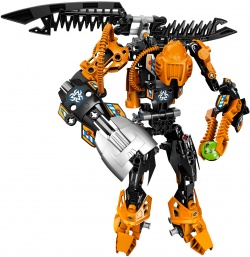 Set 7162 Rotor was released in 2010 as a 145-piece set. The set includes a firing Meteor Blaster and a sticker sheet for decorating some of its pieces. When fully built, it stands over 8 inches (20 centimeters) tall.