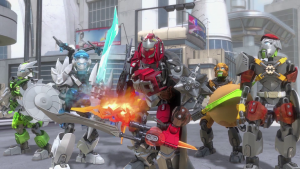 While navigating the frontier of deep space, the crew of a space vessel called the Valiant discovered a mysterious object floating in space. Back in the Hero Factory, Preston Stormer summoned the Alpha 1 Team in order to give an update regarding the recapture mission after the mass breakout that happened before. Stormer afterwards sends Natalie Breez to monitor deep space frequencies. While monitoring, Breez picked up a transmission of the Valiant's Captain Aquax ordering the chief science technician Xera to return to the Valiant. After Xera brings the object aboard, the ship gets infested by the Brains who turn Kirch, the security chief, into the leader of the swarm.

At the Hero Factory, monitors detected the Valiant's increasing collision speed as the ship headed to the Factory. Stormer realizes that something is wrong and sends Breez and Rocka to investigate the situation at the Valiant. After dismissing William Furno's and Dunkan Bulk's idea of destroying the ship despite Rocka and Breez being inside, Stormer follows the pair and arrives at the ship with the help of a jetpack. Inside the ship, Rocka and Breez detect organic lifeforms and split up, with Rocka avoiding an attack by the Brains and Breez meeting Xera who updated her on the situation and sent the Hero to the vents.

While inside the ship, Stormer contacts Aquax and lies that the Valiant had not been boarded. Aquax seem cordial, but forgot crucial details of a story of his and Stormer's past. Kirch then attacks Stormer but leaves after detecting Rocka's presence, and leaves Aquax to attack Stormer. Aquax disobeys and allows Stormer aboard in order to take credit for Stormer's potential control from the Brains. After Stormer goes missing, Bulk orders a troop of Drop Ship with Nathan Evo in order to destroy the Valiant. Bulk orders an attack to the ship and then leaves the group in order to present his resignation to the Hero Factory. Kirch captured Rocka, while Breez finds a Brain in the vents. After freeing some crew-members along with Stormer, Aquax confronts the pair but was interrupted by Xera.

Kirch announces that he had Rocka hostage until Evo's Drop Ships arrive with new orders from Furno. They use their tractor beams to try and slow the ship's speed. Kirch was forced to report to the command chair, and Xera betrays Breez by explaining he was going to be the Brains' ambassador to the world, but Breez stops the chief technician. The ship was reprogrammed to fly into the sun, and Bulk and Furno arrive to stop Kirch from assaulting the Drop Ships. Kirch is forced to leave with the Brains, save for Aquax, and promises Stormer that they would meet again. Bulk then destroys the Valiant's engines in order to stop it, but as evidenced by Kirch and the Brains being vaporized by the heat of the star upon leaving, no one could leave or save the Heroes inside the ship. Aquax then helped deploy explosives in front of the Valiant, sending it away from the sun of Makuhero City.

The Heroes are rescued, and Aquax promised that the Heroes would guard the outer rim of the galaxy. Stormer refused to accept Bulk's resignation, and thinks that the assault to the Valiant was just an opportunity the Brains took, not their true plan.

Afterwards, the Brains arrive to the Makuhero Belt and land in the planet where the Hero Factory is located. The Brains begin to enslave the countless animal species that inhabit the asteroid, including Scarox, Bruizer, Pyrox, Ogrum, Aquagon, Frost Beast and the Dragon Bolt. The transformed animals then start an attack to the Makuhero City.