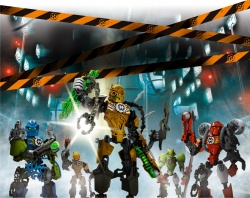 In the aftermath of their mission on Quatros, Alpha 1 was reverted back into their 2.0 forms from their 3.0 upgrades, though Rocka asked specifically for a new upgrade from Nathaniel Zib. Strangely, activity ground to almost a halt at Hero Factory, and Zib took a day off. The criminal Voltix popped up on Hero Factory's radar, and William Furno and Rocka were sent to capture him. Voltix was easily apprehended and brought to containment at Hero Factory until it was realized the entire thing was a sham. The villain created an electrical projection of Von Nebula and used it to activate the defeated villain's Black Hole Orb Staff, creating a black hole. The villains' cells were broken, and every single villain ever captured by Hero Factory plowed past the responding Alpha 1 Team and escaped in a mass breakout. The mission was a complete disaster for Hero Factory, and Zib called an emergency meeting. He displayed the new Hero Cuffs and sent Heroes on solo missions out in the galaxy to recapture villains. As Heroes went on their separate missions receiving upgrades, Zib saw Rocka who wasn't leaving, but was called off before investigating why Rocka hadn't gotten an assignment. Natalie Breez was sent after Thornraxx, Julius Nex after XT4, among other Heroes sent to planets. Furno was sent to Scylla after Jawblade, and left with a Hero Recon Team detachment, including Omega. 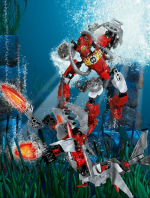 Arriving at Scylla, Furno dove into the ocean searching for Jawblade, and found him. In the ensuing battle, Furno faced off against the aquatic villain who revealed his plan to rust all Heroes. Finding some Oxidium, Jawblade did just that, rusting Furno. Furno fought back in time for him to supercharge his Hero Core vaporizing the rust and allowing him to apprehend Jawblade. Nathan Evo had been trying to contact Furno during his fight with Toxic Reapa on Z'chaya where the villain was attempting to assemble a mutant army. Toxic Reapa had been outwitting Evo, but after talking to Furno, Evo got enough confidence in himself to execute a precision battle maneuver. Firing his Tank Arm at a rock, Evo launched himself at Toxic Reapa and cuffed him. Omega later went to Kollix IV to assist Preston Stormer in capturing Speeda Demon who had stolen a Nitro Rocket Motorbike when he escaped. Stormer was in the midst of a massive bike chase against Speeda Demon, pursuing on his Ultra Mach Speed Cycle. Despite Speeda Demon's best efforts, Stormer apprehended the villain. Omega oversaw Evo capturing Toxic Reapa before going to Tansari VI. But meanwhile in Sigma Sigma, Splitface was attacking a communications satellite. Mark Surge went after him and they engaged in a battle on the asteroids. Halfway through, Splitface used Surge to send an asteroid at the satellite, and although Surge fragmented it, it was still a danger. Surge managed to use his Electricity Shooter to shock Splitface unconscious and throw him at the asteroid, shattering it. On Tansari VI, Omega arrived as Jimi Stringer took on Voltix. Voltix knocked Stringer down and fired his weapons right at Stringer, but Stringer blocked it with power cells, draining Voltix's energy. As he cuffed Voltix, Core Hunter flattened Stringer but he himself was driven off planet by Dunkan Bulk who pursued him. Omega tried to radio Hero Factory, but got no response. 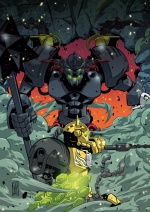 Unbeknownst to the Heroes, Hero Factory had been compromised by Black Phantom who had infiltrated it and captured Mission Control. He put up the Failsafe Shield to stop anyone from entering, and had managed to capture Hero Factory with no Heroes present. Except there was still one, Rocka, who tried to get Zib to reveal why the shield had gone up, Zib lying it was a regularly scheduled drill. As Black Phantom sent his Arachnix after Rocka, and outlined his plan. Transmitting Hero Factory's structural plans to an unknown recipient, he revealed that he was planning to destroy the building. Before Black Phantom disabled Zib, Rocka had confirmed that the override for the Failsafe Shield was in Akiyama Makuro's office, who was out of town. Chased by the Arachnix Rocka got to the shield override, contacting Stormer, Furno, Breez, and Surge who had arrived, telling them about Black Phantom's daring plan. Stormer had reporter Daniela Capricorn report that no Heroes had returned, causing Black Phantom to head to the Assembly Tower, not expecting Heroes. Rocka then took down the shield and the Heroes rushed in, with Evo unlocking the Assembly Tower. Black Phantom had himself plugged into the systems, preparing to destroy the building. Rocka attacked Black Phantom while the other Heroes were bogged down by Arachnix. Rocka was having no success and Stormer advised unplugging Black Phantom, but Evo suggested to plug him in more. Rocka took Evo's idea and overloaded Black Phantom's systems, defeating him. Mission Control was restored as criminals were sent to Asteroid J-54 for safekeeping (though Speeda Demon and Voltix escaped at some point). Makuro and Zib met with Alpha 1 and found that Black Phantom had sent the building plans to another villain, how now could create his own dark Heroes. 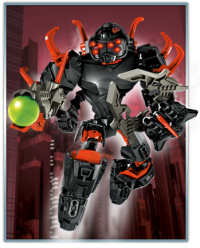 Breez, Bulk, and Nex later returned unsuccessful, but all of Alpha 1 was called in to respond to a Delta-Red warning: Core Hunter was attempting to assemble the Doom Box which could destroy the galaxy. Logs of past missions against Core Hunter were reviewed and the team set off with Nex and Evo running Mission Control. Bulk and Breez went to Geb, the closest lead the team had to the second Doom Box fragment. Pretending to be smugglers, Breez and Bulk went underground to Geb's vault to hide fake materials. Seeing the Doom Box fragment, Breez and Bulk attempted to grab it, but Core Hunter arrived, using anti-gravity disks to send the box and Geb up to him. He didn't stop Geb, but grabbed the fragment, though Bulk fired his Missile Launcher at him. Arctur saved Core Hunter, telling him to head to the fragment in a mine. Later, Stormer and Furno touched down at the mine avoiding the planet's automated security robots and found Core Hunter had gotten there first and used fake dust to cover his tracks. They met Arctur upon leaving who gave Speeda Demon's name, causing Stormer to send Rocka to interrogate Splitface at Asteroid J-54. Rocka was given the name of a planet, and arrived there, also meeting Arctur. The last hope at stopping him was Stringer and Surge heading to a ship graveyard, the third location. Ambushed by Core Hunter's henchmen, Stringer was pinned down but the others arrived to see Core Hunter with the Doom Box fragments. Surge shocked him causing Core Hunter to spasm and form the Doom Box though Arctur shattered it and teleported Core Hunter to where it was forged, the only place it could truly be re-formed. Arctur explained that the Doom Box has to be reformed to be truly rendered harmless, and this must be by using Core Hunter's Hero Core Remover Tool to absorb the energies. Meeting with Rocka on the planet, Arctur led the Heroes to Core Hunter where Stormer told Core Hunter he was used as a test for Heroes unfit to serve causing Core Hunter to kill Arctur and re-form the Doom Box in anger. Breez absorbed its energies in Core Hunter's weapon, causing it to become supercharged, but ending the Doom Box's threat. Using his powers Core Hunter defeated every Hero save Surge who he offered a post in his empire. Surge refused, reflecting Core Hunter's energy back at him causing Core Hunter's body to warp and vanish.

The Heroes logged Arctur as the sole casualty and took the Doom Box back to Hero Factory where Surge asked Stormer why Core Hunter turned evil, to which Stormer didn't know. They soon had to continue recapturing villains. Furno later asked Bulk about a file tied to many of the high-profile villains they were capturing, and Bulk told Furno about the Legion of Darkness. Stormer caught them, and told them to focus on the breakout.