Brand new Hero and rookie Alpha 1 Team member Daniel Rocka is returning from another successful mission when he receives a distress call from an exiled Hero Factory professor, Aldous Witch. Nathaniel Zib contacts Rocka, and tells him not to respond to the alert; as the signal is coming from the protected nature reserve planet Quatros, Zib intends to send a full team to deal with the emergency, but Rocka insists on traveling there himself to live up to Hero standards. Communication between the two is disrupted, and Rocka identifies the source of the disruption as emanating from Quatros.

Landing on Quatros, Rocka discovers the Witch Doctor's abandoned ship, noting that the damage does not look recent. He is suddenly attacked by a Fangz hound, though the Fangz hound quickly runs off. Rocka follows the Fangz hound until he reaches a clearing with another Fangz hound, and a large, skull-faced figure. The being identifies himself as Aldous Witch, now calling himself the Witch Doctor, and sends the two enslaved Fangz to attack Rocka. 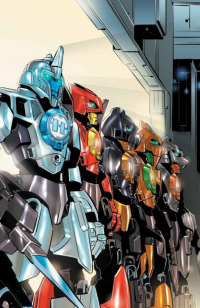 Back at the Hero Factory, William Furno and Jimi Stringer are about play a game of Roboball when they are joined by Dunkan Bulk and Julius Nex. After upping the opposing team's simulated numbers, the four begin the match; the Heroes are eventually victorious. Preston Stormer approaches them after the match, informing them that Rocka has disappeared on Quatros in search of Professor Witch. Furno, harboring a certain amount of animosity toward the new team rookie, scoffs at the idea that Rocka would get in trouble on what is widely considered a "paradise" planet. Quatros is also one of the last natural supplies of Quaza, the material that makes up Hero Cores. Mining was halted on the planet years before, when it was discovered that taking Quaza from the planet was detrimental to its structural integrity, and also affected the wildlife adversely. To assist them on Quatros, Zib outfits them with animal-based armor, and also provides them with armor for Rocka.

When they reach Quatros, Stormer sees that the landscape has changed drastically, which is attributed to the continued illegal draining of Quaza. Descending onto the planet, Stormer also realizes the the force field normally protecting the planet has been deactivated. Only Hero Factory personnel have access to the codes that can disable the field, and Stormer voices the fact that Witch, as a former educator, had access to the codes. As the team searches for Rocka, Stormer explains that Aldous Witch was his professor when he was a rookie Hero, educating in astronomy and architectural geology. However, he secretly possessed a desire to own the same Quaza Cores that all Heroes have, despite not being a Hero himself. Recently, Stormer discovered Witch attempting to install a Core onto himself, and was forced to stop his old Professor; Witch was exiled from the Hero Factory as a result.

The team locates Rocka, badly beaten and injured, and he identifies the Witch Doctor as his attacker. Furno spots the Witch Doctor fleeing in the trees and gives chase, despite an order from Stormer to stay behind, and Nex works to heal Rocka. Though Furno catches up to the Witch Doctor, he is outmatched in his speed and power, and Witch Doctor escapes, expressing gratitude that Alpha 1 has brought him a ship capable of housing his new form, unlike Rocka's: the previous distress call had been a ruse to lure someone with a ship, as Witch had crashed his upon arriving to the planet. Stringer and Nex catch up to him, and the three are confronted by beasts of the forest, all under Witch's control: a Scorpio, the Raw-Jaw, and a Waspix. However, Witch soon recalls the animals, claiming that he has other tasks for them.

Returning to the rest of the group, Furno is berated by Stormer for disobeying orders. Rocka emerges from their ship, clad in new lion armor, which he selected to keep his golden color motif. Arguing with Stormer, Furno mentions that the entire incident was the fault of Rocka, angering the new Hero. Nex interrupts, unable to precisely locate the Witch Doctor's signal, and they turn to Zib for help. Zib identifies an ancient Quaza temple as the general source of the Witch Doctor's location. There, Witch is mining the planet of all the Quaza, using the Raw-Jaw to haul it. Alpha 1 sets off to find the temple and arrest Witch. 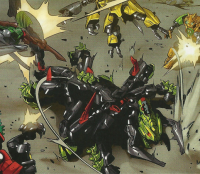 On the advice of Professor Zib, Alpha 1 searches for a transportation unit used in the planet's early mining days to quickly reach the temple. While traversing through the jungle, they encounter a space bridge capable of teleporting them to that sector, which Bulk identifies as the transporter they are seeking. However, the transporter is not functioning at full capacity, and can only take three of them. Stormer suggests splitting the team up into two groups, and Furno and Rocka each immediately volunteer to head one of them. As a training exercise, Stormer allows each of them to lead a unit: Rocka takes Stormer and Bulk, planning to use the teleporter, while Furno (who was apprehensive about using the potentially malfunctioning transport unit) leading Stringer and Nex through the jungle.

Emerging from the transport unit, Rocka and his team discover that their sizes have been drastically reduced, a result of the malfunctioning transporter. They encounter another Fangz hound, but are able to work together and drive the beast off. After finding the Witch Doctor and observing him draining the planet's Quaza, they contact Zib; Zib informs them that the planet will soon self-destruct due to the lack of Quaza in it. The Witch Doctor, while musing over his plan to take the Quaza mined from the planet and create an unstoppable army to destroy the Hero Factory with, notices the shrunken Heroes, and has Bulk and Rocka imprisoned.

Meanwhile, during their travels through the jungle, Furno's cell encounters the Witch Doctor's Waspix and Scorpio; Furno takes the Waspix on in an aerial battle, while Stringer and Nex fight the Scorpio. The Waspix is eventually trapped in some vines, and Furno returns to help his allies, but the Scorpio proves to be too strong for all of them; Nex is knocked off the tree they are on and almost falls to his death (bequeathing his game systems to Mark Surge and professing love for Natalie Breez), but is saved by Furno. The Waspix frees itself and attacks Furno again, though Furno comes up with a plan to defeat it. Enlisting Stringer's help, the two perform a move they had previously used in Roboball matches to incapacitate the Waspix. Nex notices corrupted Quaza Spikes embedded in the wasp, theorizing they might be connected to Witch Doctor, and has Stringer break them. Freed of the Witch Doctor's control, the Waspix flies away. The Scorpio continues to assault the Heroes and, unable to defeat it, the three retreat from the area. Furno's team leads the Scorpio to the mining site, where they succeed in removing the corrupted Quaza spike from it. Angry at the Witch Doctor for enslaving it, the Scorpio attacks Witch, who sends the Raw-Jaw to fight in his stead. Raw-Jaw defeats and dispatches the Scorpio, while Witch activates his Quaza transport, which has finally been loaded with the last of the planet's Quaza. Furno attempts makes a run for the escaping Quaza chamber, but is diverted by two Fangz, and Nex and Stringer help return the other three Heroes to proper size. Stormer insists on taking on the Witch Doctor, while the remaining Heroes work to free the Raw-Jaw. Focused on defeating the Witch Doctor, Rocka instead tries to take on the tyrant by himself, but is quickly swatted aside, and Stormer steps in to fight his former instructor. Irritated at his inability to help, Rocka enters the temple to devise a method of defeating the Witch Doctor. He is found by Furno and Nex, who had just led the Raw-Jaw into a situation where Stringer could remove his Quaza spike. Putting aside his personal feelings of the rookie, Furno suggests coming up with an entirely new method of battle to confront Witch with, and outfits Rocka with ancient armor pieces present in the temple. Now an armored colossus, Rocka confronts the Witch Doctor, and engages him in battle. Despite the increase in strength, Rocka is still overpowered by Witch. However, Stormer had deduced that the Skull Staff Witch has been using, both as a weapon and as a tool to enslave the animals, utilizes corrupted Quaza, and is the source of Witch's powers. He steals the staff and breaks it in half, rendering Witch powerless. Furno, meanwhile, is trying to reach the Quaza containment chamber and deactivate it. However, his wings were broken in the previous battle, and he is unable to reach the floating unit. Enlisting Bulk's help, he finally makes it to chamber and breaks it open, dumping the reserves of Quaza back into the temple and into the ground, rejuvenating the planet's health. With the planet restored to its former glory, the Alpha 1 Team prepares to take Witch back to the Hero Factory, successful in their mission. Stormer commends Furno for overcoming his dislike of Rocka in order to defeat the Witch Doctor, claiming that they were most successful when they worked as a team.