Splitter Beast is a type of mutated Jumper, a dual organism comprised of two individual beasts.

A Splitter Beast was one of the mutated Jumpers attacking Antropolis City after the city accidentally uncovered their nesting grounds. During the response by Hero Factory, Mission: Invasion From Below, Splitter Beast encountered William Furno, alone after his Battle Machine had been disabled. Unable to deal with the gigantic beast, Furno instead led it to Nathan Evo, who had just finished his Evo XL Machine. Together, the two were able to defeat the beast. However, the creature revealed its nature as two separate entities, one detaching from the other and kidnapping Furno to bring underground.

All of the Jumpers were eventually recalled by the Queen Beast, ending the invasion.

Splitter Beast is actually two different creatures that combine to form a single, two-headed entity; however, the two can split at will. The larger of the beasts supports the smaller, quadrupedal beast on its back; the larger beast is bipedal, and bears plasma claws.

During the invasion, Splitter Beast grabbed a lamppost and wielded it as a melee weapon. 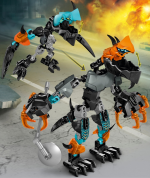 Set 44021 Splitter Beast Vs. Furno & Evo was part of the first half of the Invasion From Below wave, released at the beginning of 2014 (though delayed until March for North America). The set is comprised of 108 pieces, 82 of which make up the actual beast and his weapon; the rest of the pieces go to the Furno and Evo mini-robot figures and their weapons.