Difference between revisions of "Television Episodes"

Television Episodes are a media used to convey large sections of the Hero Factory story.

File:Hero Factory Nicktoons Ad.jpg
An advertisement for the Rise of the Rookies miniseries

The first four TV episodes, half an hour in length and directed by BIONICLE: The Legend Reborn director Mark Baldo, aired in late September 2010. These episodes were later collected and released as Hero Factory: Rise of the Rookies on DVD.

The fifth episode debuted as a half hour special in April of 2011, on Nickelodeon 2. A one hour episode detailing the Savage Planet storyline premiered September 5, 2011 on Nicktoons, followed by a marathon run of all six episodes in a row. The DVD of Savage Planet was released October 4th, 2011, featuring Ordeal of Fire as bonus content.

An additional one hour special has been commissioned for 2012, directed by Howard Baker, who has previously directed other LEGO features including LEGO: The Adventures of Clutch Powers. 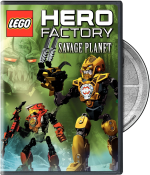 Rookie Hero Rocka is sent to find civilian Aldous Witch, who has crash-landed on Quatros. Rocka arrives on the planet, but he cannot find Witch. Rocka is confronted by a Fangz, but is incapable of defeating it and is knocked unconscious. When Rocka is reported missing, the Alpha 1 Team is equipped with animal-based equipment and sent to find him.

The team discovers that Aldous Witch has turned into the Witch Doctor and has taken Rocka hostage. The Heroes, with the information given by Professor Zib, conclude that the excessive mining of the Quaza has made the planet unstable, destroying it from its core. They find an ancient mine that could be used to instantly transport them to the central mine that leads to the core of the planet. Nex concludes that it would only be able to transport three Heroes. Stormer, Rocka, and Bulk enter the teleport, but are shrunken in size. Furno, Nex, Stringer go through the jungle but are attacked by Scorpio on the trek.

Rocka's group arrived at the central mine, where Witch Doctor had been mining the Quaza. They notice that Raw-Jaw is a slave worker for Witch, collecting the Quaza that is mined. Witch abuses the beast and controls his mind with his Skull Staff and the corrupted Quaza spike. Witch Doctor finds the Heroes and traps Bulk and Rocka in the box he was using to carry the Quaza stones. They begin by freeing the enslaved Raw-Jaw from the corrupted Quaza and Witch Doctor. Rocka, who has since received a modification giving him larger, more resilient armor and a stronger double-claw combo tool, approaches Witch. The two duel with seemingly even power, but Witch Doctor downs Rocka. As Aldous prepares to finish off Rocka, Stormer breaks his Skull Staff, rendering his powers useless. Furno and Bulk successfully return the Quaza to the core of the planet, restoring it to it's former state.