"I hate Hero Factory. Hunt them down. Make them pay."
― Thornraxx, Legion of Darkness

Thornraxx is an insectoid villain who was a former member of the Legion of Darkness. He was later one of the many villains to escape during the Breakout.

Thornraxx hailed from a hive planet that thrived with many members of his species. At some point, Thornraxx became a villain and, like many other villains, Thornraxx found his criminal activities impeded after the Hero Factory opened and began rounding up villains. He was in a robot repair shop favored by the galaxy's villains when he, Splitface, Jawblade, and Speeda Demon were recruited by Black Phantom as the first members of the Legion of Darkness, an organization designed to take down the Hero Factory. Under Black Phantom's leadership, Thornraxx attacked a hover vehicle carrying a shipment of 24 newly-manufactured industrial robots from a Makuhero Industries plant. He disabled the pilot using his stinger, took command of the vehicle, and brought it to landing behind a hill. Black Phantom reprogrammed twenty three of the industrial robots to begin wandering aimlessly while reprogramming the last to serve him as the villain XT4.

Later, when the Legion of Darkness received word that the Hero Factory had been shut down, Thornraxx assisted in trying to claim it as the Legion's new headquarters. He teamed up with Speeda Demon, Voltix, and Toxic Reapa to enter the Hero Factory through the roof of the Mission Control room and release XT4 to sabotage a Hero Factory control console. However, Preston Stormer arrived to stop XT4, and Black Phantom commanded Speeda Demon's crew to attack the Assembly Tower instead. As Speeda Demon headed for the hangar entrance, dodging fire from security robots and laser turrets, Thornraxx began shouting instructions at him. Annoyed, Toxic Reapa threw him out of the scout ship's hatch, and Thornraxx suffered major damage when he landed.

Thornraxx escaped from Hero Factory's villain containment facility in a breakout initiated by the Black Phantom, and fled to his hive planet homeworld, hoping to recruit other natives of the planet as allies. Natalie Breez arrived there first, enraging Thornraxx who began to fight, thinking that she was corrupting the nest. Breez managed to dodge one his attacks and defeat him.

After Von Nebula took control of Makuhero City and created Von Nebula City, Thornraxx became one of the agents of the Citadel. When the Brains attacked, Thornraxx and Splitface set up a barricade to try and repel the assault. Though the Brains had no interest in them, they killed the pair with their eyebeams.

Thornraxx's species is notorious for their irritability and quick temper, and Thornraxx is noted as being even more aggressive and malicious than any other members of his species. He has a habit of hanging upside-down from ceilings and a limited command of speech. He is also a skilled pilot due to his flight instincts, but tends to be uncomfortable being inside a ship that somebody else is piloting. He is also capable of firing a naturally powerful venom from his mandibles.

Many villains found Thornraxx to be very annoying when he was around them.

Thornraxx's natural weapons include his stinger and claws, which he has amplified. 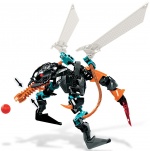 Set 6228 Thornraxx was released as a small set as part of the Breakout wave at the beginning of 2012 in Europe, Australia/New Zealand and Asia and in North America in the summer of 2012. The set contains 44 pieces, including a Hero Core printed with a 200-point code for use in the Breakout game. The Hero Core is not used in the construction of the model, however. Also included is a launcher that fires a spherical ammunition piece when the sides are squeezed, representing Thornraxx's venom spitter. The parts from the Thornraxx set can be combined with parts from set 6227 Breez to create a combi model based on instructions from HeroFactory.com.