"You think I'm dumb. Everybody thinks I'm dumb... until I get my hands on them."
― Thunder, Hero Factory Promotional Magazine

Thunder is a formidable, yet smug villain who worked for Von Nebula.

Thunder was wanted by the Hero Factory for numerous crimes of theft and extortion, as well as a vicious attack on a trade fleet. Von Nebula eventually recruited Thunder into his group of criminals to destroy Hero Factory.

Along with Corroder, Meltdown, and XPlode, Thunder arrived at New Stellac City to combat the Alpha 1 Team Heroes on the ground while Preston Stormer and William Furno fought Von Nebula in the mastermind's black hole. After Von Nebula disarmed the Heroes using the gravitational pull of his black hole, Thunder used his new Nebula Gas Cannon to pin back the Alpha Team and pursue them with the other villains. The criminals eventually ran out of ammunition, and the Heroes counter-attacked and knocked them out. Thunder was then arrested and imprisoned by Hero Factory.

Thunder has since escaped in the mass breakout initiated by Voltix.

Thunder is known to be extremely strong, utilizing his brute strength to fight his way out of most situations, but is also characterized by his lack of intelligence. He has the ability to twist his body into a ball and bowl over his adversaries.

Thunder wields a Crusher Claw and a Meteor Blaster. While ambushing Preston Stormer in New Stellac City, Thunder was also armed with a Nebula Gas Cannon. 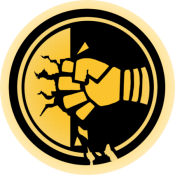 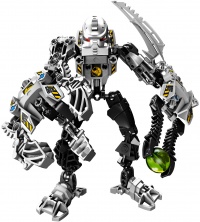 Set 7157 Thunder was released as a box set in mid-2010, featuring a Meteor Blaster, and a Crusher Claw. The set includes 47 pieces, as well as a sticker sheet for decorating his armor and weapons.