Why Thresher is EVIL 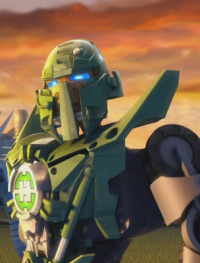 This man is pure evil

Thresher is secretly the evil mastermind behind all things bad in Hero Factory. First of all, he tampered with the Assembly Tower, creating Von Ness. We know what happens to him. This tampering may have resulted in Core Hunter...and Surge. (Who will go Vakama soon, just watch) XT4 had got into Hero Factory by a fake mission posted on Thresher's computer. It was assumed Black Phantom hacked the Hero Factory, but Thresher could have intentionally posted it! This led to XT4 entering the building. Hero Factory is shut down by a prison break at Asteroid J-54 where Alpha 1 horrendously failed. Who's not there? Thresher. Responding to a crash engineered by Black Phantom. Directly because of this, Thresher has been collaborating with the Legion of Darkness.

Then Black Phantom engineers a plan to take over Hero Factory, and Von Ness, Bulk, and Stringer leave directly before due to accepting Thresher's presented offer. Then in the ensuing power outage, Thresher goes to the Assembly Tower sending Stormer to his doom with XT4. He fakes getting defeated by the villains he's collaborating with, which is why they don't kill him. When Black Phantom arrives he has to pretend to want Thresher dead...because Heroes are chasing him. Black Phantom vanished during Thresher's first missions, meaning he was working with Thresher, not 'watching Heroes'. Black Phantom tries to take out Hero Factory by overloading the power and destroying it from the Assembly Tower. It is only defeated by Stormer's actions, Thresher admits that if Stormer didn't signal the other Heroes, Black Phantom would have succeeded. Thresher than covers up the incident so villains don't know all they need to do is take Makuhero City!

At New Stellac, it was a conspiracy! Thresher and Von Ness KNEW what was going to happen, 'responding to a bugarly alarm'. Thresher KNEW Silver was there, and had himself get defeated, and Von Ness flee. Leaving Stormer alone against Silver. Stormer was meant to die! After that, Thresher would awake and defeat Silver and have saved the city...and removed his adversary Stormer

Only one of these men is a Hero

Then when it fails, Thresher 'retires' and vanishes off the grid...to plan to take down HF! Thresher knows Black Phantom can destroy HF through the Assembly Tower...because it almost worked last time. He collaborates to have the Breakout happen to Black Phantom can take down HF! Black Phantom then sends the plans to Thresher for HF. Even though Black Phantom fails, Thresher has the plans! Stormer says Thresher is working at a mind weapon plant. Could that be...the Brain Attack? And when the Villain Factory is released, Thresher will either use it to make villains, or make it an HF competitor creating 'real Heroes' to secretly undermine the real HF. THRESHER FACTORY.

Thresher is the man that will lead to HF's destruction. He's been behind it all, and may even have been Von Nebula's BOSS! This is a conspiracy.

THIS IS THRESHER FACTORY.

When Villain Factory led by Thresher and Von Nebula goes down, Surge will give in to his dark side and join them, basically becoming HF's Vakama. Surge is the anti-Von Ness. Von Ness and Surge faced XT4 and Core Hunter, both powerful enough to kill each the Hero. Von Ness relented and let XT4 go, but Surge rebelled against Core Hunter. Surge could atone for Von Ness and defeat him once and for all. Then Surge will become a Hero again, after remembering how he stood up to Core Hunter...thus defeating Thresher.

Some passages on Secret Mission 2 are from Thresher's POV, making him seem like a nice guy. Even if he wasn't evil in that book, he could have turned evil after it starting with New Stellac, Breakout, Brain Attack etc. After Black Phantom failed in Secret Mission 2, he could have been inspired that it could actually work, similar to how Teridax wasn't going to overthrow Mata Nui until stopping the Barraki from doing just that. Watching other bad guys almost succeed can inspire your dark side.