Difference between revisions of "Voltix"

Voltix is villain that had attempted to destroy Hero Factory multiple times.

Voltix was running a job with Splitface when they were attacked by Preston Stormer, who was able to subdue them with the help of his commanding officer Thresher. Voltix was put in a plastic cell on Asteroid J-54, while Splitface escaped. 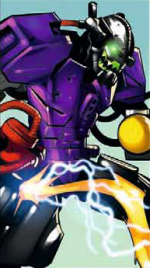 Voltix in the midst of the breakout

Voltix traveled to the planet Tansari VI, attempting to disrupt the power supply of their energy collection array and create a superweapon for his own personal use. Jimi Stringer followed Voltix to the area, in order to apprehend him. Stringer tried to capture Voltix using his newly acquired Hero Cuffs, but Voltix used his electricity to disable the cuffs. Escaping through the mist, Voltix began drawing energy from the array into his blaster, incapacitating Stringer with the power. However, Stringer discovered that energy cells present on the planet could absorb Voltix's electrical blasts, repeatedly using them until Voltix had run out of energy. Stringer then recovered his Hero Cuffs, and used them to apprehend Voltix, as well as unplugging his volt switches. Voltix was returned to the Hero Factory by Stringer, but escaped and was later listed as still on the loose. 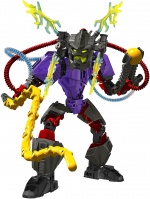