Difference between revisions of "Von Nebula"

Template:Criminal Von Nebula, formerly known as Von Ness is a renegade hero. He was once a member of Preston Stormer's old team. At one point in time, he led a villain army with the intent of destroying Hero Factory. However, he was defeated. Von Nebula is currently trapped inside his Black Hole Orb Staff under heavy guard. 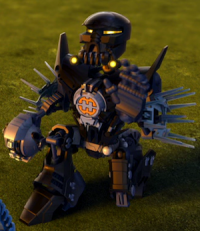 Von Ness was a rookie hero with Preston Stormer on a team led by Thresher. The team had a mission where they were called to New Stellac City in order to investigate a routine alarm. Instead they found a gigantic robot that knocked out Thresher. Von Ness got scared, and asked to guard Threser while Stormer went to combat the robot. Von Ness then ran to the craft they used to get to the city, and flew off. Stormer tried to stop him, but Von Ness managed to escape. This allowed Stormer to jump down and disarm the robot. Because of Stormer's success, Von Ness grew bitter about Hero Factory, and went rogue. He rebuilt himself into the criminal Von Nebula.

Recruited by Von Nebula in his mission to exact revenge on Stormer were Xplode, Rotor, Meltdown, Corroder, Thunder, and Vapour. After Xplode, Rotor, and Corroder's missions, Von Nebula instructed Meltdown on what his would be. Despite Meltdown attack with nanobots, Stormer managed to survive. Calling in everyone but Vapour to New Stellac City, the heroes were overwhelmed. Von Nebula spoke from his black hole base to the heroes, and Stormer let himself get sucked into the hole to face Von Nebula, but William Furno arrived too. Von Nebula spoke to them, and the heroes told him they had a charge that would rip the black hole apart. Believing Stormer had it, Von Nebula attacked him, but Furno dropped the charges. Stormer reached out and used Von Nebula's Black Hole Staff against him, and the being was sucked within it. Von Nebula's conscious remains active in the staff under heavy guard.

Von Nebula was always a cowardly person, even as Von Ness. This cowardice caused him to only care about his well being, the opposite of Hero Factory principles. Von Nebula developed a hatred for Hero Factory, and the heroes, specially Stormer. Von Nebula forced himself to believe that it was Stormer's fault in that fateful mission. He was also very smart, as Von Nebula was able to create a plot to bring Stormer down.

The Black Hole Staff was an unique staff that was able to manipulate black hole energy.

In summer 2010, Von Nebula was released as a large box set.