From HEROsector01
Jump to: navigation, search
The printable version is no longer supported and may have rendering errors. Please update your browser bookmarks and please use the default browser print function instead.

Von Nebula, formerly known as Von Ness, is a rouge Hero turned villain. He was once a member of the Alpha 1 Team, but defected during a mission, and eventually became a reputed crime lord.

Von Ness was formerly a rookie hero working with Preston Stormer on the first ever Hero Factory team, led by Thresher. He joined his fellow Heroes Dunkan Bulk and Jimi Stringer and formed the Alpha 1 Team. After returning from a routine guarding mission, Bulk and Von Ness saw how Stormer and Stringer returned with an industrial robot who claimed to be a Hero. However, XT4 was later revealed to be a villain working for Black Phantom. XT4 escaped and stunned all the Heroes including Von Ness. The robot was tracked to Asteroid J-54, and the Heroes arrived in order to stop him. Bulk and Von Ness entered the prison, and confronted XT4, who was escaping with Toxic Reapa and Voltix. XT4 then released all the villains from the prison, and while Bulk held them off, Von Ness went to the top of the prison. There, he was approached by the escaping criminals, and he realized that he would die if he challenged them. Von Ness let them pass, and lied to Bulk by saying that he never saw them, and witnessed Stringer and Stormer's apparent death in mid-air. Bulk and Von Ness were recovered by Thresher who arrived after a mission to Mechna, and later informed of Hero Factory's closing. Von Ness, Stringer, and Bulk took up Akiyama Makuro's offer of a security position at Makuro Industries, and were leaving when Stormer signaled for help. They arrived back at the Hero Factory where they saw the Legion of Darkness attempting to take it over. Von Ness defeated XT4 by increasing the gravity under him, and they chased Black Phantom into the Assembly Tower. Von Ness helped Thresher free himself from the Legion by lowering his leader's gravity and raised Speeda Demon's. In the battle, all the villains were easily captured and Nathaniel Zib announced Hero Factory would become active again. 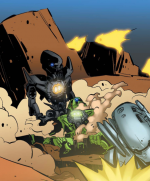 Von Nebula being absorbed into his staff

Von Nebula's spirit was later invoked by Voltix, in order to incite a breakout; upon being imprisoned in the Storage Facility, Voltix explained that Von Nebula's staff remained a symbol of hope to criminals, and then triggered it, which created a massive black hole through which all imprisoned villains escaped.

Early into Akiyama Makuro's Hero Factory, Von Ness decided to betray the Heroes to Black Phantom. Black Phantom received plans of Hero Factory and destroyed the building and imprisoned the Heroes. Von Ness rebuilt himself into Von Nebula and led the Citadel crime ring that took over Makuhero City and many planets. Leading from the renamed Von Nebula City, Von Nebula and his inner circle of former Legion of Darkness members created a world where it was against the rules not to commit a robbery and where power was valued. Makuro was also imprisoned secretly by Von Nebula. Noticing his dependence on his Black Hole Orb Staff, Von Nebula attempted to merge its power in him. Stormer stopped him midway through the process and both of their bodies were heavily distorted.

Speeda Demon later approached Von Nebula and told him that robot L-22 had recorded robots searching for Hero Factory at the Von Nebula University. L-22 was brought to Von Nebula where she told him of the robots and that Stormer was the one who activated the search. Robots matching L-22's description were then reported encroaching on Citadel territory calling themselves the Alpha Team. Von Nebula sent XT4 to get Alpha Team to negotiate, and signaled them to come to the Citadel by giving them an imprisoned Jawblade. There, Alpha Team demanded the Citadel's surrender, and Von Nebula was shocked by seeing the Stormer of the main reality, who asserted being of that universe. Putting them in prison, Von Nebula wondered about Stormer until the Brains invaded. The Brains allied with Von Nebula to find the information in Stormer's mind. Stormer's mind was scanned and the Brains informed him that Stormer was from another universe and that another Von Nebula existed there. As the Brains went to activate the generator to go the main universe, Von Nebula told them he had to get it to work personally. Fearful that the prime Von Nebula would infringe upon his empire, and jealous of his assumed lack of physical deformities, Von Nebula allied Alpha Team and Makuro to create a beta wave to defeat the Brains. The Brains sensed the deception and attacked, but were attacked in turn by the Alpha Team of Von Nebula's universe, led by a repaired Stormer. Von Nebula's rage at seeing Stormer caused Von Nebula to activate his staff on his enemy. Both Stormers attacked and overloaded Von Nebula's staff, and Von Nebula's body folded in on itself and vanished from existence.

In this reality, Von Ness never betrayed the Hero Factory, and became a prominent Hero and leader of the Factory after Makuro retired. He was eventually killed by a reformed Legion of Darkness.

Von Ness was a cowardly Hero, and this cowardice caused him to eventually flee during a crucial mission. However, Ness did not accept responsibility for his actions, and instead blamed Stormer for it. He developed a deep, unyielding hatred for Hero Factory, the Heroes, and his old teammate, and set out to exact revenge against the perceived wrongs they had inflicted upon him. As a criminal mastermind, Von Nebula excels in planning and organization, applying his talents to criminal enterprises.

Von Ness was built with Hero Factory standards with a Hero Core. He later transformed into a larger, more sinister villian, and renamed himself Von Nebula. He seemingly lost his Hero Core during the process.

As a Hero, Von Ness carried a handheld weapon that could alter gravity. After his transformation into Von Nebula, he carried a Black Hole Orb Staff, which allowed him to create powerful black holes. 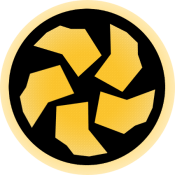 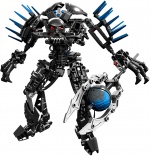 "I'm a Hero. They're villains. It's my job. But ... I never asked for this job. I just got created and told this is what I would be doing. No one asked if it was what I wanted to do."
― Von Ness' thoughts, Secret Mission 2: Legion of Darkness

"Hero Factory will be crushed, by the hand of Von Nebula!"
― Von Nebula, The Enemy Within

"We take it back to the Hero Factory and put it in an isolation cell. And then we hope there's a prison that can hold his evil. We hope very, very hard."
― Preston Stormer, Von Nebula Rising