"If Furno has a flaw in his system, it’s that he expects too much from himself and pushes himself harder than even the Team Leader does. The stress Furno inflicts on himself is usually unrealistic and leaves him seriously drained. It’s not that Furno doesn’t like to have fun; but he even pushes himself too hard during downtime."
― Akiyama Makuro, HeroFactory.com

William Furno is a powerful Hero from Hero Factory. A promising rookie in his youth, Furno had a successful career under the tutelage of the Alpha 1 Team, and was eventually promoted to the team, along with his teammates Mark Surge and Natalie Breez.

William Furno's creation was of interest to the designers, as it was slightly different from a standard Hero. After his construction, he was sent to get his scheduled Hero Core charge. However, the charge was extremely high, and was more reminiscent of a final charge than an initial one. Furno was made leader of the rookie team cell consisting of Natalie Breez and Mark Surge, and they were placed under the direct leadership of the Alpha 1 Team. Furno was widely considered a promising up-and-comer, though the attention he received made him uncomfortable.

Furno traveled with the Alpha 1 Team when they went to stop XPlode and Rotor from stealing C-4000 explosives from a mining center on Merak 9. Preston Stormer ordered him to remain in the ship, angering Furno, but he eventually joined the battle, and attempted to Hero-cuff Rotor. Furno failed, and Stormer reprimanded him for letting Rotor escape. At the Hero Factory, Furno trained in a simulation of that mission several times to impress Stormer, despite warnings by Surge and Breez to not push himself too far.

Later, Furno was with Stormer and the other rookies when they were called into an explosives plant, where XPlode and Rotor were. Stormer suggested using an empty Hero Pod as a distraction in order to give the ship time to land, and the diversion worked. XPlode soon knocked out Stormer, and Furno summoned his Furno Bike, and raced on his bike at the two villains. XPlode fled, leaving Furno to successfully Hero-cuff Rotor and transport him to Hero Factory.

Shortly after returning to the Hero Factory after capturing Rotor, Furno was ordered to receive a Hero Core recharge, as his was low on power. While he was in the recharging in the Quaza Chamber, Surge, Breez, Dunkan Bulk and Jimi Stringer were attacked by the villain Corroder at a prison construction site. Bulk sustained serious injuries, forcing the team to construct a Hero Cell. Furno was outfitted with acid-resistant armor, and sent to the penitentiary, where he used a variant of his Hero Pod diversion in order to gain an advantage of Corroder. When Breez arrived in a Hero Craft, Furno bluffed Corroder into believing that another squad of Heroes had arrived, and the acid villain fled.

While Bulk recharged his core at the Hero Factory, Stormer thanked Furno for his efforts.

Stormer took Furno and the other rookies with him to investigate an alarm at Mekron City, meeting with his ally, the Police Chief Drax. However, Drax was infected with nanobots, and attacked Stormer and his allies. After they subdued Drax, Meltdown arrived, and infected Stormer with the same nanobots.

While being examined at the Hero Factory, the nanobots took over, and Stormer ran from the building despite Furno, Stringer, and Bulk's efforts to catch him. Furno realized that Stormer would attempt to take down a billboard featuring the two of them, that Stormer had previously mentioned his distaste for. Arriving at the billboard, Furno dueled with Stormer, and made Stormer realize that his irrational hatred of the billboard signified that his personality was still intact. Stormer suppressed the influence of the nanobots long enough to be transported back to Hero Factory, where Bulk, Breez, Surge, and Stringer returned with a cure from Lunar Tratix.

When the rookies learned that Alpha 1 Team was in trouble at New Stellac City, and the rookies flew there, watching footage of Thresher's ill-fated mission with Stormer and Von Ness, who fled out of cowardice and became the notorious villain Von Nebula. Once there, the heroes helped Alpha Team against Thunder and the rest of Von Nebula's henchmen.

During the battle, a black hole opened, and Furno followed Stormer into it, intending to help him take down Von Nebula. The two came up with a plan to destroy the black hole using the anti-gravity thruster rings in their boots, though Von Nebula learned of their idea. The heroes convinced Von Nebula that Stormer was the one with the rings, and when Von Nebula fired at Stormer, Furno dropped the rings in the vortex. Stormer sucked Von Nebula into the Black Hole Orb Staff, and they escaped the black hole before it exploded. Von Nebula's staff was placed in a high-security vault in Hero Factory.

Furno and his newly promoted team joined Stormer on a mission to Tanker Station 22 which the Fire Lord and his gang were attacking. Furno climbed up a building and acted as reconnaissance, and saw the Fire Lord absorbing energy from the fuel cells. They were eventually overpowered, and when attempting to evacuate the last civilian group, the Heroes were cornered by the villains. Surge drew the villains away, and the Heroes were forced to leave without him. At Hero Factory, Stormer convinced Akiyama Makuro to upgrade them to 2.0 forms. In a training session, Furno struggled with wielding his Multi-Tool Ice Shield, but Stormer deemed them ready to ship out.

Furno and Breez's weapons stuck together

Returning to the station, Furno blew the Heroes' cover when he accidentally fired his weapon. While Stormer went to attack the Fire Lord, Furno and Breez scouted the station. Furno received a distress beacon, right before a ship, piloted by Jetbug, fired upon the two. Breez and Furno's weapons became interlocked, and they were ambushed by Drilldozer. Nathan Evo and Julius Nex then arrived, distracting Drilldozer, and Furno and Breez attacked him. Nex separated the two, and they continued the fight. Surge eventually commandeered Jetbug's ship and rammed it into the Fire Lord, defeating him. The team returned to Hero Factory, where the Fire Lord was imprisoned. Surge was upgraded, and Furno attended the ceremony honoring his bravery.

During a game of Robo-Ball with Stringer, Bulk, and Nex, Furno was informed by Stormer that new team member Rocka had gone missing on the jungle planet Quatros. To help function on the planet and rescue Rocka, the Alpha 1 team was given new animal-based equipment, and Furno was outfitted with eagle armor. Arriving on Quatros, the team discovered an injured Rocka, who identified his attacker as Aldous Witch, now styling himself as Witch Doctor. Spotting Witch, Furno gave chase, defying Stormer's orders. He attempted to fight Witch Doctor, but was outclassed by his speed. Witch Doctor departed, and Nex and Stringer caught up with Furno. Witch's bestial slaves (Raw-Jaw, a Waspix, and a Scorpio) approached to fight the Heroes, though Witch soon recalled them. Upon his return, Stormer admonished Furno for charging off recklessly, and the team began searching for the Witch Doctor, pinpointing his location near an ancient temple. During their trek through the jungles, they discovered a transporter, capable of teleporting only three of them to their destination. Stormer responded by dividing the team into two, placing Furno and Rocka in charge of the units, to help the two work out their rivalry. Taking Stringer and Nex, Furno opted to take the long way to the temple and traveled through the jungle, encountering the enslaved Waspix and Scorpio. During the fight, Furno's flight gear was damaged, though the three Heroes were victorious in the end.

The three arrived at the temple and helped rescue Stormer, Bulk, and Rocka, who had been shrunk by the transporter and captured. Using the recharged transporter, they restored the other three Heroes to their correct size, and renewed their assault on Witch Doctor. As Stormer engaged Witch and Bulk and Stringer grappled with the Fangz, Furno and Nex joined Rocka in the temple, trying to find a way to defeat Witch Doctor. Utilizing ancient pieces of armor present in the temple, Furno and Nex built Rocka a powerful suit of armor with which to challenge Witch Doctor. While Rocka fought Witch, Furno attempted to reach the blimp filled with the Quaza, which was taking off from the planet. As his flight gear was damaged, he was unable to achieve the necessary boost to reach it; he enlisted Bulk to help him get to an optimal altitude, where he glided toward the blimp, and disabled it. Rocka and Stormer's combined efforts defeated Witch Doctor, and the planet was refilled with the Quaza and restored to its original state.

Before leaving the planet with the de-powered Witch Doctor, Stormer commended Furno on putting aside his differences with Rocka to help the team succeed. 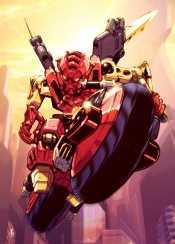 Furno is impatient, but passionate, and eager to prove himself, especially to Stormer. He is also very overconfident, and believes he has the skill to succeed at any task. This amount of self-confidence forces him to push his own limits in order to succeed at harder tasks, even during his downtime. Time and missions have tempered his overconfidence, though he is still very eager. His attitude brought him into conflict with the similarly headstrong Rocka (who was modeled after Furno himself). Furno initially struggled with the fact that he was no longer the "hot-shot" rookie after Rocka's creation, but eventually grew to accept the new Hero.

His model, at the time of creation, was the newest and most up-to-date one available. His Hero Core is exceptionally pure, thought to be the purest in existence. He was later upgraded to a 2.0 form, with fire-resistant armor, thermo-vision goggles, and a more powerful Hero Core. For mission on the planet Quatros, Furno was given hawk-based armor, and his helmet was equipped with enhanced scanning capabilities. This armor also possesses wings which allow Furno to fly, though these were damaged during his time on Quatros.

William Furno initially carried a Dual Fire Shooter. After being upgraded, he carried a Multi-Tool Ice Shield, which also possessed fire-shooting abilities. His latest weapon from his 3.0 upgrade is a plasma bow. He also rides a bike named after himself, that he uses for combat and travel. 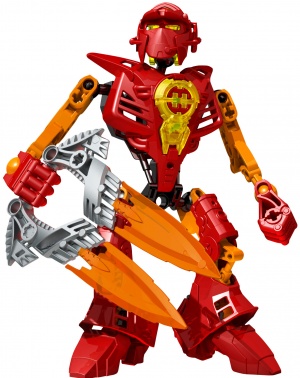 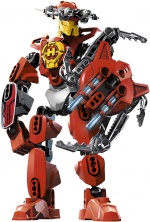 Set 7167 William Furno was released in mid-2010 as part of the original Hero line, which also contained Stormer, Stringer, Bulk, Breez, and Surge. This set contained 19 pieces. Its parts could be combined with the Stormer and Breez sets to create Lucas Valor using instructions from the September-October 2010 edition of the LEGO BrickMaster Magazine.

Furno was released again in 2010 as part of set 7158 Furno Bike. This version of Furno used 15 of the set's 165 pieces, and could be connected to the bike via pins on his feet.

A new version of Furno, set 2065 Furno 2.0, was released in early 2011 as part of the Hero 2.0 line, along with Evo 2.0, Nex 2.0, Stormer 2.0, Breez 2.0, and Surge 2.0. This set contained 30 pieces, including an armor piece decorated with the name Furno 2.0. Furno 2.0's parts could be combined with parts from Evo 2.0 in order to create a new model using instructions on the Hero Factory website. It was also one of the first sets to be a part of the HeroPad system, which allowed users to enter codes from the bottom of set canister lids in order to unlock prizes in an online game.

Set 2191 Furno 3.0 was released in mid-2011, containing 28 pieces. This set included an armor piece printed with the name Furno 3.0 and a hawk pattern. A combiner model could be built using parts from Furno 3.0 and Bulk 3.0 and instructions available on the Hero Factory website. Like the hero sets of the previous wave, this set's canister had a code printed on the underside of the lid to unlock online Hero Factory content.