Difference between revisions of "Witch Doctor" 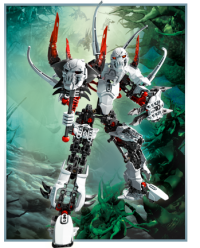 Aldous Witch was an instructor at the Hero Factory, educating rookie Heroes. However, he secretly coveted the Hero Cores that all Heroes wear, though he was unable to wear one himself. When he tried to install a Core onto himself, he was forcibly stopped by one of his students, Preston Stormer. As a result of his position within the Hero Factory, he was exiled rather than being jailed.

In order to obtain Quaza, the mineral that makes up Hero Cores, Witch traveled to the protected planet Quatros, using his knowledge as Hero Factory staff to deactivate the force field guarding it. However, his ship crash landed on the planet. Witch began illegally mining the material, and during his excavation efforts, he discovered a temple housing a mysterious skull. By adding a small amount of Quaza to the skull, Witch created the Skull Staff, which amplified the power of the Quaza used, and transformed Witch into Witch Doctor. Using corrupted Quaza spikes, Witch Doctor enslaved the animals of the forest, and had them assist in mining the Quaza. In order to acquire a new ship, capable of housing his new form and leaving the planet, Witch Doctor sent a distress signal to the Hero Factory, claiming that he was being attacked by the beasts of the planet.

Rocka, a rookie Hero, arrived on the planet to assist Witch, but was instead attacked by Witch Doctor. Rocka's new team, the Alpha 1 Team, arrived to search for Rocka, and encountered Witch Doctor. Despite new armor suited to the planet, the team was unable to defeat Witch Doctor, who unleashed his minions at them.

Aldous Witch was once a mild-mannered professor, with a secret desire to possess a Quaza Core like Heroes do. His covetous attitude led him to attempt to illegally mine the material. Upon being exposed to the amplified Quaza energy by a mysterious skull, Witch became Witch Doctor, increasing in size and strength, and is now much more powerful and faster than most Heroes. He is also a ruthless tyrant to the animals of the forest, enslaving them all and forcing them to behave in ways they would normally not.

Witch Doctor carries the Skull Staff, a staff powered by Quaza that he found while illegally mining the mineral. The staff allows him to control beasts of the forest through corrupted Quaza spikes.

Set 2283 Witch Doctor was released in mid-2011, containing 331 pieces including four dual-colored Quaza spikes. Witch Doctor set carries a launcher that can fire a spherical ammunition piece when the sides of the launcher are squeezed.