Difference between revisions of "XPlode"

"I don't need your money. I work for the thrill."
― XPlode, Hero Factory Promotional Magazine

XPlode made his name in the underworld of the galaxy as a criminal-for-hire, and has become a multi-millionaire due to his success. He has a reward placed on him on every inhabited planet within 1000 light years. 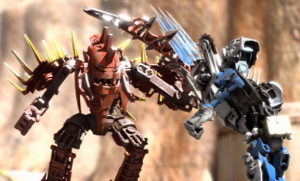 Later, Rotor escaped and Von Nebula teamed him back up with XPlode to raid an explosives plant on Lemus 2. As the two were carrying the stolen goods away, Rotor spotted a Hero Pod and shot it down. However, Stormer and the three rookies sent with him, William Furno, Natalie Breez, and Mark Surge, had landed in a Hero Factory Drop Ship, using the empty Hero Pod as a decoy. The group of heroes attacked, but XPlode told Rotor to direct all of their weapons at Stormer, so they could pick off the rookie heroes with ease once Stormer was down. One of the blasts that struck Stormer dislocated some of his wiring, forcing Breez to repair him while Furno and Surge engaged XPlode and Rotor. XPlode and Rotor attempted to use the stolen explosives to fend off Furno in his bike, but Surge used his Lightning Shooter to prevent them from reaching the explosives. As the heroes came closer to cornering the henchbots, XPlode once again betrayed Rotor and fled, while Furno hero-cuffed Rotor.

XPlode was later sent with Meltdown by Von Nebula to back up Thunder and Corroder at New Stellac City, who were fighting Natalie Breez, Dunkan Bulk, Mark Surge, and Jimi Stringer while Stormer and Furno confronted Von Nebula.

XPlode in Rise of the Rookies

After Von Nebula used a black hole to capture the heroes' weapons, the criminals repeatedly fired their weapons in pursuit of the disarmed heroes. However, the heroes managed to avoid their foes' blasts until the villains' ammunition ran out. They jumped out at that moment, no longer outgunned, and attacked the criminals, knocking all of them out but XPlode, who fired his explosive spikes at them as a last resort. However, the heroes used their new Particle Separators to avoid the lethal blow, and Stringer knocked out the unarmed XPlode.

XPlode has since been imprisoned by Hero Factory.

XPlode accepts jobs only when they appear to present a significant challenge, since he is already very wealthy. He is an extremely skilled criminal, but he knows his limits and will not run into a trap very often or fight a battle he cannot win. XPlode is also impatient and bad-tempered, often questioning the decisions of his employers or superiors. As a partner, he is very unreliable, having twice abandoned Rotor in unfavorable battles.

XPlode's weaponry includes a Meteor Blaster and Explosive Spikes lining his body that can be fired at his enemies like mini-rockets. He also carries a large spiked club.

The box set 7147 XPlode was released in mid-2010. The set included 45 pieces including a firing Meteor Blaster.

"You forgot about one weapon that's not empty -- me!"
― XPlode, Episode 4: Von Nebula