XT4 is a reprogrammed four-armed industrial robot, who formerly worked in the Legion of Darkness. He was later among many criminals who escaped during the Breakout.

XT4 was a member of the XT4 series of industrial robots, a shipment of which was diverted by the Legion of Darkness and dispersed. One sole remaining robot, XT4, was reprogrammed to be a villain and Black Phantom's personal servant. XT4 was subsequently given commands to pretend to act as a new member of the Alpha 1 Team and assist Preston Stormer and Jimi Stringer during a mission that had been set up by the Legion. XT4 was taken back to the Hero Factory after the mission was complete, as XT4 told them that he was a new member of Alpha 1. At the Hero Factory, he hacked into the Factory security system and turned it against Alpha 1. While they were incapacitated, XT4 stole a Drop Ship and traveled to Asteroid J-54, the Hero Factory prison, where he released Toxic Reapa and Voltix from containment. However, they were cornered by Dunkan Bulk and Von Ness, causing XT4 to release a flood of prisoners. After climbing to the roof with Toxic Reapa and Voltix, they met Von Ness, but he let the villains pass. XT4 let them into his Drop Ship and they left, later meeting with the rest of the Legion.

Black Phantom later organized a takeover attempt of the Hero Factory, which had reportedly been abandoned. XT4's information gave the villains complete knowledge of the systems, allowing Jawblade to swim into the systems and deactivate the external power. XT4 and Splitface then went into the power room of the Factory to take the main power systems offline. However, Stormer attacked the duo, distracting XT4 with metal tendrils. Black Phantom then arrived and saved XT4, and told Stormer his plan was to escape with XT4 but abandon the rest and destroy the building. Bulk, Von Ness, and Stringer then showed up and began to attack. XT4 wounded Bulk, but Von Ness greatly increased the gravity around XT4, who became so heavy the ground buckled underneath him, and he vanished. However, XT4 managed to escape.

The Hero Factory captured XT4 at one point, and placed him in their Villain Containment.

Black Phantom recently engineered a breakout, and XT4 escaped the prison along with many other villains. He returned to his home planet of Mechna, pursued by the Hero Julius Nex. XT4 planned to convert other XT robots into villains, and had converted a few when Nex finally arrived. When Nex reached XT4, XT4 knocked Nex unconscious. However, Nex was faking unconsciousness and apprehended XT4 while the villain had his back to him. XT4 was then reimprisoned by Hero Factory.

Von Nebula built XT4 from one of the captured Akiyama Makuro's robots, and used him as a member of the Citadel crime syndicate. When the mysterious Alpha 1 Team began committing thefts, XT4 was instructed to run a brazen theft in the city to attract them. Alpha Team did respond and he told them that Von Nebula had a desire to negotiate with them, and Stormer set the terms of negotiation. XT4 ran a search and found they did not exist on records at the negotiation.

XT4 is a small four-armed one-eyed cyborg. He lacks any emotions or sophisticated social skills, due to his processor not being designed to function in such a manner, and does not react well to insults. He speaks very mechanically, and his criminal tendencies are due to being reprogrammed by Black Phantom, as he has no personality other than what he was programmed with. His traits, however, make him a feisty villain.

XT4 wields four weapons: two Striking Blades, a Laser Slicer, and a Razor Disc Slicer which is used as both a weapon and a shield. 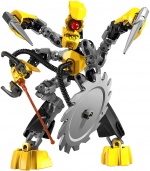 Set 6229 XT4 was released in the summer of 2012, as part of Hero Factory's continued "Breakout" line. The set contained a Hero Core not used in the construction, but which contained a code that could be entered for points to use in the Breakout web game. XT4 could be combined with 6221 Nex to make a larger combi-model.