Mission: Savage Planet is an online game hosted on HeroFactory.com and on the Cartoon Network microsite.

Nathaniel Zib informs Preston Stormer that he has received a distress call from Aldous Witch. that his ship has crash-landed on Quatros. After expressing his disbelief that Witch is on Quatros and telling Daniel Rocka not to go there, Stormer 3.0 sends the player. The Hero arrives on Quatros, and has difficulties contacting William Furno. You face infected beasts, and Furno reports an inference blocking his radio signal. Rocka decides to act as a repeater to boost communications between the player and Mission Control. Zib tells the Hero that Quatros is one of the last Quaza resources. After fighting through enemies, Furno informs the player that the Hero has to save Witch and escape now. Rocka offers to come aid the Hero, but Stormer keeps him on giving air support. The Hero meets a Raw-Jaw who begs for help, but is taken over by an unknown entity. The Raw-Jaw is defeated, and the voice controlling it brushes off the defeat.

The player gets a static-filled distress call from Evelyn Captcha who references Witch. Rocka gets a lock on the source of the transmissions, and gives the coordinates to the Hero. Rocka tries to contact Captcha to no avail, until breaking through to her. After fighting many enemies, Stormer advises the Hero to proceed with caution as he uploads additional information about Witch to the player's console. Entering a structure, Rocka is stunned by the revelation that Witch was a scientist at Hero Factory, and taught Stormer and other heroes, and that Stormer caught him doing illegal activities. The player enters a cavern where an infected Waspix threatens to attack if it is not led to the Heroes' ship, and warns the player not to enter a nearby temple. When the Waspix is defeated, it still warns the Hero not to enter the temple. Captcha urges the player inside, and after fighting enemies, the Hero enters a code given by Captcha into a terminal.

Captcha informs you that she was an archaeologist investigating the temples on Quatros when Witch captured her. She plans to guide you through the temple, and you fight the Witch Doctor's minions, and reach a closed door. Captcha begins working on opening the door. You go through it and find Ranger Pete, a worker who was trapped after trying to save Captcha after hearing her distress call. Captcha is surprised to hear that Pete is alive, and Pete explains that he could not escape the temple or contact Captcha because his communication chip was damaged. Pete and the Hero make their way to rescue Captcha, and run into a Fangz who warns the Hero to run away. Witch Doctor takes the Fangz over, and attacks the player. When the Fangz is defeated, Witch Doctor tells the Hero that he already has all the Quaza he will ever need. Captcha has you enter a code in a terminal to proceed through the temple.

You enter a laboratory, and Captcha tells you to hurry to her position. After fighting through waves of minions, Pete observes that this must have been where Witch Doctor's experiments took place. Moving on, Captcha warns the Hero that there is not much time left before Quatros explodes. After defeating another room, you enter another code into a terminal, and enter the room where Captcha is held. She explains the Witch Doctor brought her to Quatros to study the temple hieroglyphics, and she destroyed his ship when she learned of his nefarious intentions. The planet begins to shake even more violently as Captcha leads you to the Witch Doctor's Quaza storage facility. You encounter a Raw-Jaw and are forced to defeat it inside the lab. After doing so, it announces that it has minions searching for your ship. Moving into the temple, you are attacked by a Waspix, but you manage to defeat it and free it from the Witch Doctor's influence. In the next room is a Fangz, who tries to kill you as it has located your ship. You defeat the Fangz and free it, and it escapes into the jungle. Captcha radios in saying she and Pete have found the Quaza and are returning it. Witch Doctor moves to intercept Captcha and Pete, but you run out of the temple and confront him. After a long fight, you manage to defeat the Witch Doctor. Captcha reports that the animals helped her restore the Quaza in time to save Quatros from exploding. Rocka confirms the seismic activity on the planet has ceased. Stormer congratulates the rookie on saving on the planet, and tells the rookie to take the Witch Doctor into custody. 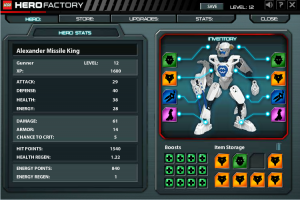 The purchase screen when talking to Big Joe

You can play as previously made hero, or use the Hero Recon Team interface to create a new hero to play as. You can choose from a long-range Gunner, a short-range Fighter, or a Technician who uses special attacks. The enemies faced are the same light gray bots from previous games now supplanted with more powerful purple robots. There are two classes in the robots, hovering gunners, and close range maulers. Maulers come in three types: normal, red ones which are more durable and stronger, and light blue ones that cannot attack but heal other units. Bosses such as Waspix have long and short range attacks and are far more powerful. On the main screen you talk to Nathaniel Zib to start main story missions, Lucy to be given a randomized mission unrelated to the story, and Quadal to enter codes. Big Joe provides upgrades to you hero in armor. Each level up you attain you can spend a special point to upgrade one of your Hero's systems. As well, you attain credits from dead enemies (as well as XP which goes to leveling) which you can spend in Big Joe's story to get new helmet, chest, tool, and boot upgrades all contributing to various bonuses. Faster energy recharge time, better defense, higher critical hit change, etc. Q, W, E, and R are your special attacks which vary depending on the hero class you choose. As well you can buy health boosts, energy boosts, attack boosts, and EMPs to use in combat.

The controls of Mission: Savage Planet include the mouse and the keyboard. Users move by directing the mouse in the direction of the desired location, and can attack by clicking the left mouse button. To use special attacks the user presses the Q, W, E, and R keys on their keyboard. You can use boosts by pressing 1, 2, and 3.