Core Crisis is the second episode in the Rise of the Rookies miniseries that aired on Nicktoons. The episode aired on September 21, 2010 and was written by Sean Catherine Derek and directed by Mark Baldo.

At Hero Factory Mission Control, Preston Stormer and William Furno come to tell Nathaniel Zib that Rotor has been delivered to lock-up. Zib congratulates Furno on the arrest. Quadal scans Furno’s Hero Core, which is low on power. Zib sends Furno to the Quaza Chamber for recharging. Quadal attempts to scan Stormer’s core as well, but the Hero refuses him. Dunkan Bulk and Jimi Stringer contact Zib and Stormer, reporting on their progress in repairing the damage on Lemus 2 and the successful installation of the new security measures for the explosives plant. They are about to leave when Zib receives an alert. Zib instructs Bulk and Stringer to respond to it with Mark Surge and Natalie Breez. Stormer demands to go as well, but Zib refuses to let him leave Hero Factory until his core is recharged. Furno is currently in the chamber, so Stormer must wait until he is out. Zib assures Stormer that Bulk and Stringer will be fine. Stormer admits to having a bad feeling about the mission, a feeling he has not felt since the Von Ness incident.

Bulk, Stringer, Surge, and Breez arrive on the prison planetoid Tantalus 5, at the construction site of Penitentiary 1331, now under attack from Corroder. Breez evacuates the construction workers while the other three engage the attacker. When Surge steps into the open to get a clear shot, Corroder sends a stack of girders plunging down on him. Bulk knocks Surge out of the way and becomes pinned under girders. Stringer draws Corroder’s fire while Surge unsuccessfully tries to free Bulk.

Zib and Stormer decide to launch a Hero Pod to send backup. Furno, fully charged, offers to go. Stormer feels that Corroder is too powerful for Furno, but no other Heroes are available, save for Maximus, whom Stormer claims is not agile enough to dodge Corroder’s acid. Furno points out that he was built with all the latest advancements in agility. Reluctantly, Stormer agrees, and Furno is refitted with acid-resistant armor. He then departs in a Hero Pod. Stringer continues to distract Corroder, while Surge stays with Bulk. Stringer makes it to cover and Corroder, realizing Stringer’s strategy, goes after Bulk and Surge. Stringer continues to fire on Corroder, angering the criminal.

Breez, having dropped off the workers at a medibot station, is making her way to the planet as well. Zib, realizing that both Heroes will arrive too late, suggests the three make a Hero Cell. Stormer adamantly disagrees, stating that Bulk’s core is too weak to do so. Bulk sides with Zib, and Stormer reluctantly agrees. Stringer makes his way to the pile of girders. Surge and Stringer force Corroder back in order to gain time enough to make a Hero Cell. Bulk fires at a girder, breaking it and sending it on top of Corroder. Corroder dodges, but the Heroes use the momentary distraction to form the cell just as Corroder fires a deluge of acid at them. Bulk muses that Stormer is likely blaming himself for their predicament. Stormer tells Bulk to save his strength by not talking. Bulk assures Stormer that the Von Ness incident wasn’t his fault. Stormer maintains that he could have prevented it.

Surge asks Stringer about Von Ness. As Stormer reminisces about the event, Stringer tells Surge that when Stormer was a rookie, his team, led by Thresher, was sent to New Stellac City to respond to a burglary. Thresher only took Stormer and another rookie, Von Ness, with him. When they arrived, they found a giant robot that was destroying the city. Thresher was knocked unconscious. Furno interrupts Stormer’s reverie as he approaches the site. Zib advises Furno to keep the pod on autopilot, as he does not have enough experience to land it himself. Furno gets an idea from this. 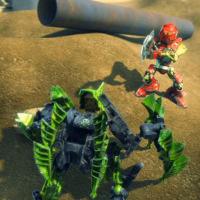 An enraged Corroder bombards the Hero Cell with acid. Furno’s Hero Pod barrels toward him and rams Corroder into a wall. Corroder taunts Furno, declaring that the Hero is trapped inside the pod. Furno tackles the villain from above, having used the pod’s ejector seat. As Furno fights Corroder, Bulk’s core becomes too drained to keep up the cell, and the three disconnect their cores. Surge attempts to help Furno but is too weak to stand. As their fight continues, Corroder shoots acid at Furno. The rookie Hero is knocked back and falls to the ground. Corroder triumphantly goes to retrieve Furno’s body, but is hit with a metal pipe. Furno is unharmed, protected by his acid resistant armor.

Breez arrives in her Hero Craft and Furno bluffs Corroder that another six heroes have arrived. Corroder flees, creating a smokescreen to cover his escape. Breez lifts the girders off of Bulk with a levitation unit. The team returns to Hero Factory, where Bulk is recharged. When Zib comments that Bulk was dangerously close to requiring a core transplant, Stringer and Breez point out the importance of a Hero’s core. When Stormer and Furno both volunteer to be recharged next, Stormer offers to race Furno to the Quaza Chamber. Zib remarks to Quadal that he feels Stormer and Furno are forming a friendship.