Saga Guides/Rise of the Rookies

(Rise of the Rookies)

Amidst an increasing presence of criminals under the direction of the mysterious villain Von Nebula, three brand new Heroes - Mark Surge, Natalie Breez, and William Furno - were rolled off the assembly line and given their initial Hero Core charges, to mark them as Rookies in the corporation. The charge William Furno received exceeds the norms of core charges, and Hero Factory analysts eagerly take note of what this will mean for his future.

Furno, Breez, and Surge were placed into the Rookie 1 unit of the Alpha 1 Team, Hero Factory's most prestigious and elite unit, and they trained under the command of Alpha 1 leader Preston Stormer. Stormer, who years before had let a teammate abandon his leader in the line of duty, was known to be extremely harsh to any rookie under his command, and was extremely critical of Furno in particular. 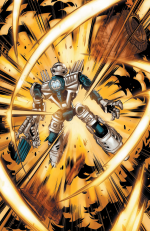 Stormer caught in an explosion on Merak 9

During a mission to guard a shipment of explosives to the mining plant on the planet Merak 9, the senior Alpha 1 members, who are accompanied by Furno, are attacked by Rotor and XPlode, two criminals working under the direction of Von Nebula. Stormer ordered Furno to remain in the Drop Ship, while he, Jimi Stringer, and Dunkan Bulk fought the criminals, who were attempting to steal some explosives. XPlode eventually abandoned Rotor, and Stormer allowed Furno to join the fight. Rotor attacked Furno, forcing Stormer to intervene, and escaped. Stormer then informed Furno that he made a 18 critical errors during the mission, leaving the disheartened rookie to throw himself into nonstop training, to prevent a repeat of the incident. Breez and Surge attempted to convince Furno to not try and live up to Stormer's standards, but Furno brushed them off. After a recharging, Furno was taken by Stormer on a mission, accompanied by Surge and Breez. Meanwhile, XPlode and Rotor had attacked an explosives plant on Lemus 2, as XPlode had suggested they do prior to their assault on Merak 9. Hero Factory received an alert about the robbery, and directed Stormer, the closest Hero, to respond. Reluctant to accept the mission due to the presence of three rookies, Stormer changed course for Lemus 2, where the Heroes confronted the criminals. The villains concentrate their fire on Stormer, and succeed in knocking him out; while Breez tended to Stormer, Furno summoned his Furno Bike, and used it to avoid the oncoming villains' attacks. With Surge's help, Furno drove the villains away from the stolen explosives, and though XPlode escaped again, Furno finally apprehends Rotor.

Upon delivering Rotor to the Villain Containment Area, Furno and Stormer were ordered to receive Hero Core recharges, as theirs are low on power. Stringer and Bulk, along with rookies Surge and Breez, were busy cleaning up on Lemus 2, after the previous mission. An alert was received about Corroder, another one of Von Nebula's minions, who was attacking the under-construction prison on the planet Tantalus 5. Stringer and Bulk took Surge and Breez to respond to the alert. While Breez worked to help evacuate the construction workers, the other three Heroes engaged Corroder. During the fight, Corroder targeted a stack of steel girders suspended in the air. Surge, unaware, was nearly struck by the falling girders, but Bulk pushed him out of the way at the last moment. Surge was unable to free Bulk from the girders, and Corroder closed in on the Heroes. Stormer debated with Nathaniel Zib, chief Mission Manager and manager of the current mission, on who to send in as backup, but are unable to find suitable Heroes available. Furno, fully charged, offered to go, and after deliberation, Stormer agreed to send him in. Fitted with new, acid-resistant armor, Furno traveled to Lemus to and engaged Corroder in a fight. Breez, having finished evacuating the workers, also attempted to rendezvous with the team. However, Stringer realized that all parties will be too late, and suggests the construction of a Hero Cell, an force field reliant on their Hero Core energy. Despite the risks, the trio form the Cell against Stormer's objections. Furno finally arrives at the site and begins fighting Corroder, assisted by his new armor. Breez arrives shortly after, and they convince Corroder that her empty ship is actually full of Hero reinforcements. Corroder buys the bluff, and flees the scene. Bulk is rescued from the girders before his Hero Core fully runs out, and is recharged back in the Factory. Elsewhere, Von Nebula, mastermind behind the recent attacks, admonishes Corroder for believing the lie told by Furno, and directs another servant, Meltdown, to initiate the next step in his plan. 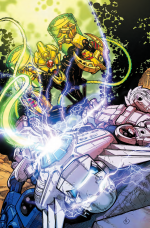 Meltdown traveled to Mekron City, where he used mind-altering nanobots to infect the local police chief Drax, a good friend of Preston Stormer. Hero Factory received an alert from Mekron City, and Stormer took the rookies as a response team. Drax attacked them after they arrived, and though the Heroes manage to subdue him, Meltdown reveals himself and infected Stormer with the same nanobots before retreating. Upon being analyzed at the Hero Factory, Stormer demanded that they restrain him, but the nanobots overwhelm his system, and he began to run amok in the Factory and Makuhero City. Stringer, Bulk, and Surge, along with Breez, travel to the moon Lunar Tratix in order to acquire the key ingredient for a nanobot cure, while Furno searched for Stormer. Based on previous conversations about a billboard featuring the two of them, Furno found Stormer attempting to destroy the advertisement; the two engaged in a vicious struggle, and Furno extrapolated from the fact that Stormer is acting upon his previous hatred to infer that Stormer's mind is not completely gone, psychologically subduing his ally and taking him back to Hero Factory. On Lunar Tratix, the Heroes encountered a territorial Tratix Reptoid; Breez used her special nature programming to communicate with the Reptoid, and enlisted its help in obtaining the missing ingredient. Stormer and Drax were both cured of their infection, and Stormer explained his theory that someone is responsible for their previous troubles, and that the recent criminal incidents were all part of a larger scheme. Von Nebula learned of Stormer's survival, and vowed to personally crush him and the Hero Factory.

When the senior members of Alpha 1 responded to an alert on New Stellac City, they discovered a monument to Stormer, made by the inhabitants in gratitude of his last mission. Bulk recognized New Stellac City as the site of Stormer's infamous mission, under team leader Thresher. They were then attacked by Corroder and also Thunder, who was outfitted with a dangerous Nebula Gas Cannon. Rookie 1, which was observing the mission's progress, lost contact with Alpha 1, and set out to help them. Zib outfitted them with Particle Separators for the fight ahead, and on their journey, shows them the mission log of Stormer's New Stellac Mission where Von Ness became Von Nebula.

Rookie 1 arrived in New Stellac, where they immediately encountered the villains; the Heroes thought they have the upper hand, but are outnumbered by the arrival of XPlode and Meltdown. After the rookies reunited with the veterans, a black hole opened up over the city, which Stormer recognizes as containing Von Nebula, and he leaps in after it. Furno, defying Stormer's order to stay put, follows him in; there, the two encountered Stormer's old ally, Von Nebula. Stripped of their weapons, the two Heroes struggled to devise a plan to defeat Von Nebula, when Furno remembered that all Heroes are equipped with Anti-Gravity Thruster Rings in their boots. The two split up, with one needing to act as a diversion. Von Nebula, believing that he understands Stormer from their time together, attacks the veteran Hero, assuming that Stormer would want to take the credit. Stormer, instead, had put his faith in the rookie Furno, who succeeded in tossing the rings into the black hole, causing it to superheat and start to explode. Catching Von Nebula off guard, Stormer stole his staff, and sucks him into it.

The other Heroes, through attrition, succeeded in exhausting the villains of their weapon supply; XPlode then revealed his last weapon, his Explosive Spikes, but the Heroes dodge this using their Particle Separators, and capture the remaining villains. Stormer and Furno escaped the black hole, and Stormer surprisingly commended Furno on his actions. The villains were locked up, and the Black Hole Orb Staff is placed under secure guard.