In the Milky Way Galaxy, the many inhabited planets were overrun by crime. They had reached the point where their powers far exceeded that of the law bots designed to stop them. Akiyama Makuro, the rich old business man of Makuro Industries came up with a radical new idea, a privatized police force created completely free of an evil tendencies. This idea transformed itself into Makuro's new company: Hero Factory. Using the rare Quaza mineral mined from Quatros and other locations, Makuro build the Hero Factory in Makuhero City. He came up with a radical new process to create and form robots that would serve as the galaxy's protectors: Heroes. The first Heroes were created, a chief among them: Thresher, who would become the first leader of Alpha 1 Team, which would be the team for the most elite Heroes. After some minor operations, Thresher was given a newly created rookie Hero: Preston Stormer, trained by famed doctor Aldous Witch. Stormer's first mission was to apprehend criminals Voltix and Splitface. Chasing them on Epsilon Gamma IV, Stormer thought he was going to succeed and went in to attack them. Voltix managed to defeat the Hero, but Thresher arrived as backup. Thresher captured Voltix, but Splitface managed to slip away. Sending Voltix to the prison on Asteroid J-54, Thresher and Stormer met the new additions to Hero Factory's Alpha 1 team: Jimi Stringer, Dunkan Bulk, and Von Ness. Thresher introduced them to Nathaniel Zib, their mission manager and Hero Factory went live. 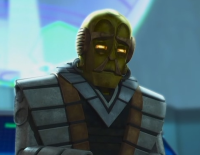 The effect on the criminal underworld was immediate. Starting with Stringer and Bulk busting Jawblade and Toxic Reapa from starting a museum heist (capturing Toxic Reapa), criminals seemed to always get stopped by the Heroes. The one criminal that vanished was Black Phantom, one of the most powerful villains. He studied Hero Factory from abroad and came up with a daring solution: to form his own villain team and destroy Hero Factory once and for all. Black Phantom founded the Legion of Darkness comprised of Jawblade, Splitface, Thornraxx, and Speeda Demon. The first step of Black Phantom's plan went into effect. The Legion went to Mechna and Thornraxx hijacked a shipment of industrial robots from Makuro Industries. XT4 was salvaged and reprogrammed into thinking he was a Hero with a deeper programming level. As Thesher went to Mechna to investigate, Black Phantom tapped into Hero Factory's systems and put a fake mission on a far rim mining planet for Stormer and Stringer, claiming Thresher transmitted to them. The two Heroes arrived at the Aird Mining Corporation plant finding mining robots attacked. Black Phantom then let XT4 go as Speeda Demon and Splitface hijacked an ore freighter. XT4 saved the Heroes, saying he was a new Alpha 1 rookie, and Stormer and Stringer brought him to Hero Factory and Bulk and Von Ness.

Suspicious of XT4, Stormer put the robot in a bare room and discovered no new Heroes had been created recently. Splitface flew the ore freighter past Makuhero City, activating XT4's secondary programming layer. XT4 tapped into the wall circuits and downloaded everything about Hero Factory and activated stun guns, stunning the Heroes. He got in a Drop Ship and went to Asteroid J-54 to break Voltix and Toxic Reapa out of jail. The Heroes followed in pursuit, but XT4 got there first. As Bulk and Von Ness descended on the asteroid, XT4 had killed the guards and was about to leave with Voltix and Toxic Reapa. Seeing the Heroes, XT4 released the other prisoners and went to the roof. Bulk formed a barrier and Von Ness weighed it down to stop XT4 while Bulk held off the others. Annoyed with Black Phantom's slow moving plan, Splitface and Speeda Demon rigged the freighter's engines to blow and got in Black Phantom's Drop Ship. Stormer and Stringer got pinned between the freighter and Black Phantom who introduced the Legion of Darkness. Von Ness was confronted by the three villains and decided to let them go. He then saw as the freighter exploded on Stormer and Stringer with Black Phantom and his legion escaping. Thresher then arrived and found Stormer and Stringer badly injured, and brought all the Heroes back to Makuhero City.

The Hero Factory in Makuhero City

The incident was disastrous for Hero Factory and it was so bad Makuro decided to cancel Hero Factory, causing the media to hail his decision. When Stormer and Stringer awoke, Thresher informed them that Hero Factory was now going to be a deep space exploration facility. Von Ness, Bulk, and Stringer accepted this and boarded a Drop Ship to be guards at Makuro Industries, taking transponders from Stormer. Despite them shutting down Hero Factory, the Legion of Darkness wasn't done. Flying in over Makuhero City, Jawblade was dropped in the sewer where he severed power to the building's external defenses. XT4 and Splitface went to the building's main power core to turn it off, while Toxic Reapa, Voltix, and Speeda Demon went with Thornraxx in the Assembly Tower. Thornraxx was thrown out of the ship as the villains descended, but were attacked by Thresher. Stormer went to fight XT4, signaling the other Heroes, but was attacked by Splitface. In the ensuing fight Splitface was defeated, but Black Phantom and XT4 confronted Stormer. Black Phantom told Stormer he intends to see the other villains captured, leaving him the most powerful being in the galaxy without competition. At that moment Von Ness arrived increasing XT4's gravity so he fell through the floor, followed by Bulk and Stringer. Black Phantom was chased into the Assemby Tower where Thresher was saved by Von Ness and a recording was played of hid treachery to the Legion. The villains turned on each other, and were all arrested.

Despite Thresher publicly covering up the near defeat, Makuro knew about the Heroes actions and changed his mind, announcing Hero Factory was back on track and new Heroes would be produced. Hero Factory regained its reputation and all but replaced law bots, becoming the greatest force for good in the galaxy. Witch, Stormer's teacher, tried to implant a Hero Core on himself, causing him to be exiled. Quaza mining on Quatros ceased to protect the planet. At one point, Thresher, Stormer, and Von Ness responded to New Stellac City to answer to a burglary call but found Silver, a giant robot. Thresher was defeated, and Von Ness lost his courage and stole the Drop Ship. Jumping on it, Stormer leaped onto Silver and defeated the robot while Von Ness fled from New Stellac. The city hailed Stormer while Von Ness grew resentful and became the villain Von Nebula. Soon after Thresher gave the Alpha 1 leadership position to Stormer, causing him to move to a planet dealing with mind weapons as a security official. Another Hero became involved in crime and turned into the villain Core Hunter, who went on a mission to steal Hero Cores. He bought the map to the Doom Box from Speeda Demon who had escaped prison at some point with Voltix and retrieved it from thieves who had found it. Though Speeda Demon was re-captured, Core Hunter went on a mission: to gather the Doom Box fragments.

Starting with a planet inhabited by green and blue beings, Core Hunter analyzed a vault and found its defenses only protected against entering and not leaving. Disassembling himself and putting himself in a crate box, he waited until it was moved into the vault. Core Hunter then assembled himself, stole the Doom Box fragment and hid in a nearby power plant, hiding the fragment in a mine. Bulk arrived to investigate the theft, and discovered Core Hunter responsible, challenging him in the power planet. In the ensuing struggle, Core Hunter escaped and the power plant was destroyed. The planet then extremely increased its security. Core Hunter got the second fragment and gave it to a duplicate who went to hide it with Geb on a criminal world. Stormer arrived and didn't find the fragment, but captured Core Hunter's duplicate. Core Hunter destroyed his duplicate remotely and told Stormer before ending communication. Finding the third fragment, Core Hunter planned to hide it on a derelict cargo freighter, but encountered a dangerous creature. Hiding the fragment in the cargo hold, Core Hunter met Stringer who had gotten on the ship as well. Realizing the animal only wanted to leave, Stringer aided it in by navigating it through airlocks Core Hunter worked. Core Hunter then left Stringer for dead, but the animal saved Stringer and the Hero left in Core Hunter's ship. Core Hunter took Stringer's, but Hero Factory remotely controlled it and sent it to Makuhero City where Core Hunter was imprisoned.