From HEROsector01
(Redirected from Comic 1: The Trials of Furno)
Jump to: navigation, search

The Trials of Furno was the first Hero Factory comic, publicly released on the official Hero Factory website. It was based off the script for the first episode of Hero Factory: Rise of the Rookies. It was published by DC Comics.

Alpha 1's senior members are pinned down by XPlode and Rotor, with Preston Stormer ordering William Furno to stay back. Stormer attacks XPlode, and he flees, leaving Rotor behind alone. Furno is ordered to hero-cuff Rotor, refusing back-up from Dunkan Bulk. Rotor escapes, and Stormer saves Furno. Back at the Hero Factory, Furno takes Stormer's advice and goes to the Training Sphere to replay the mission. Natalie Breez and Mark Surge warn him that he has been working too hard, but Furno insists that he wants to impress Stormer. Stormer then takes the rookies on a training mission, but are called to Lemus 2 where XPlode and Rotor are stealing explosives. They attack a decoy Hero Pod, and the Heroes go to attack the pair. XPlode knocks Stormer out, and Furno jumps on the Furno Bike, rushing at the criminals. Surge shocks XPlode, and Furno hero-cuffs Rotor while XPlode gets away. As the others stand over Rotor, Stormer says that when XPlode returns, Hero Factory will be ready. 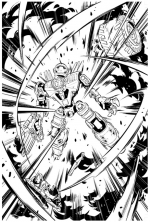 An uncolored sample page of the comic