From HEROsector01
(Redirected from Episode 1: Trials of Furno)
Jump to: navigation, search

Trials of Furno is the first episode in the Rise of the Rookies miniseries that aired on Nicktoons. The episode aired on September 20, 2010 and was written by Sean Catherine Derek and directed by Mark Baldo.

At a mining center on Merak 9, Heroes Preston Stormer, Jimi Stringer, Dunkan Bulk, and rookie William Furno are guarding a ship carrying C-4000 explosives. Stormer, Stringer, and Bulk see the explosives safely to the ground, while Furno tells the miners to stay underground until the shipment is secured. Stormer then fires at Rotor after telling Furno to stay back. Rotor dodges the blast and returns fire. Stringer and Bulk join Stormer in shooting at the criminal as well; however, they are unable to hit him. XPlode suddenly flies in on his bike and runs Stormer down. Dismounting the vehicle, he begins firing at the Hero. Stormer leaps for cover, narrowly avoiding the blast.

At Hero Factory. Nathaniel Zib and Quadal contact Stormer from Makuhero City, as they are worried about him. Rookies Natalie Breez and Mark Surge rush to Zib, asking if the team is alright. Surge voices his confusion about Stormer's refusal to let Furno fight. Breez reasons that Stormer simply wants to keep Furno safe. Furno disagrees, pointing out that he is positioned directly over the explosives. 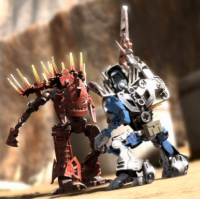 Stormer emerges from cover and freezes XPlode's Meteor Blaster solid. XPlode discards the weapon and sword fights with Stormer. After the Alpha 1 leader disarms him, XPlode creates a diversion and retreats, leaving Rotor at the mercy of the Heroes. Stormer summons Furno from the ship, ordering him to cuff the criminal. As the doubtful rookie approaches, Rotor floats up just out of reach, but Furno jams the criminal's rotor blades with his weapon, felling Rotor, and proceeds to cuff him. Rotor pulls out a concealed weapon. Stormer knocks Furno away. Rotor fires at Bulk and Stringer and escapes. Furno becomes irritated with Stormer, claiming he saw the weapon and was handling the situation. Stormer takes the blame for the criminal's escape, telling Furno he should have left him in the Drop Ship.

Surge tells Zib that he believes Stormer's too tough on Furno, and Zib gets them to go. Mr. Makuro enters and asks for Zib's evaluation of the mission. Zib concurs with Surge and Breez's observations. Mr. Makuro reasons that perhaps the reason Stormer treats Furno more harshly is because realizes Furno's potential. Zib offers another explanation: that Stormer still blames himself for a previous mission that went wrong, saying that the team leader seems determined never to let rookies endanger the mission or themselves again. Mr. Makuro states his belief that Furno has the potential to become the leader of Alpha 1 someday and hopes that he can overcome the trials he will face.

As the Alpha 1 Team returns to Hero Factory, Stormer advises Furno to replay the mission in the training sphere, noting he made eighteen critical errors. After hours of being in the training sphere, Furno is joined by Surge and Breez, who try to convince him that Stormer is impossible to please. Furno denies it, stating that Stormer demands perfection from every Hero, including himself and that one day, he will earn Stormer's respect. Stormer inquires as to Furno's whereabouts the next day, as the rookie was supposed to be at the launch pad. The three find him in the training sphere, exhausted, and take him to be recharged.

Breez and Surge discuss the feeling of being supercharged for the first time. After Furno is fully charged, he tells Stormer that he was wrong about how many critical errors he made; Furno counted nineteen in the mission replay. Stormer instructs Furno to go to Hero Launch and to bring his bike; Breez volunteers herself and Surge to come along. When Surge asks where they are going, Stormer does not say.

At the Call Center, Lucy receives an alert from the planetoid Lemus 2, where an explosives plant is under attack. Zib receives the alert as well, and contacts Stormer, requesting his team to respond as they are the only one close enough. Stormer is reluctant to go, having only rookies with him. But at Zib's urging, he flies to Lemus 2.

At the plant, XPlode and Rotor carry crates of explosives to their vehicle, bickering. Rotor notices a Hero Pod descending from the sky and shoots it down. Some distance away, Furno lands the Hero Craft and joins Stormer, Surge, and Breez on the ground, noting the decoy's success. The group attacks the two criminals. The pair aim for Stormer, convinced that if he falls, the rookies will be easy to take down. Stormer is hit and falls unconscious. The rookies rush to his side and Breez deduces that the impact of the shot disconnected a vital power unit. Furno tells them to get Stormer to cover and retrieves his bike from the Hero Craft. He races towards XPlode and Rotor, dodging their fire as he goes. As Furno nears, XPlode abandons Rotor once again. Furno leaps off his bike, tackles Rotor and begins fighting him. XPlode tries to make off with the explosives but Surge's lightning blasts cause him to retreat and fly away on his vehicle.

As Furno continues to wrestle with Rotor, Breez repairs Stormer. Furno defeats Rotor, binding him with Hero cuffs in the process (using the move he was practicing in the training sphere). Furno escorts Rotor to the Drop Ship, prodding the criminal with his weapon as he walks. Stormer gruffly congratulates Furno. Furno then reminds Surge and Breez that XPlode is still at large.