From HEROsector01
(Redirected from HRT)
Jump to: navigation, search

The Hero Recon Team is a special covert division of Hero Factory.

The Hero Recon Team was created by Akiyama Makuro shortly after the founding of Hero Factory as an intel gathering organization led by Merrick Fortis. Fortis personally established a secret base somewhere in Makuhero City, and headed the recruitment efforts.

Hero Recon Team members are experts at collecting and studying information from around the galaxy. They are always searching for clues through battlegrounds and the wreckage left by villains and monsters. They then report their findings to Hero Factory designers, mission managers and Hero team leaders, who use the information to improve all aspects of Hero Factory.

Commander Fortis recently developed new elements for the Recon Team, taking inspiration from the Alpha 1 Team's journey to the jungle planet Quatros and their encounters with the Witch Doctor. Recon Team members now have access to various jungle armor pieces, including newly developed "combi-elements". However, the metal that makes up the signature Recon Chest plate has run out, halting its production.

A Recon squad has also been tracking the efforts of the Alpha 1 Team after the Quatros incident, including their recent capture of the villain Voltix. However, during a brief lull in villain activity, they discovered that Voltix's capture was staged, and that it was all to help orchestrate a massive breakout. The Recon Team, along with all other available Heroes, were organized to help deal with the disaster.

There are thousands of Hero Recon Team members throughout the galaxy, and they are often recognized by their unique black and silver chest plate. Heroes from the Recon unit can wear multiple types of armor and are trained to use different types of weapons and parts - even those used by villains, like the Lava Blaster and transparent cladding.

Although secretive, members of the Hero Recon Team have a reputation for being intelligent, brave, and resourceful.

As head of the Recon Team, Merrick Fortis holds the rank of "Commander". Another member, Vic Tory, is designated as a "Captain Lieutenant", and is the Head of Communications for the team. Standard Heroes not possessing any additional rank within the organization are known as "Agents". 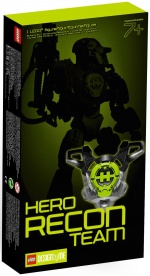 Set 11995 is a box set that can be ordered using the LEGO Shop website. It includes a custom Recon Team agent built using the Hero Recon Team website, an instruction booklet for the custom hero featuring the name and stats assigned to the hero before ordering, and a circular "Agent" sticker. The back of the box includes a statement in various languages welcoming the agent into the Recon Team, signed "Merrick Fortis".

When the service first launched, Hero Recon Team agents could include up to 31 pieces, including an exclusive chest piece co-injected with black and silver metallic plastic. An update in September 2011 raised the maximum piece count to 35 and expanded the parts palette to include a wider variety of elements, although heroes built with the exclusive chest piece could no longer be ordered through the service.

Many Hero Recon Team agents ordered near when the service first launched were delayed due to production issues. As compensation, when these orders finally shipped, they included a bonus flame element and a letter from Merrick Fortis explaining that villains had attacked the production facility as an in-story explanation for the delays.